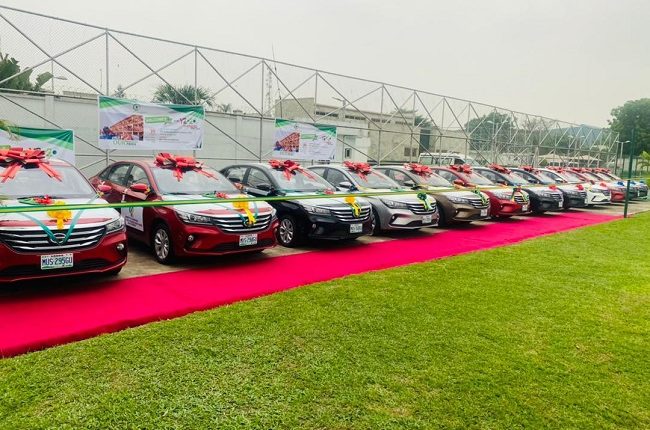 The Lagos State government, on Tuesday, gave out a brand new car each to a total of nine classroom teachers and three school administrators in the state’s public schools across primary to secondary level.

The cars were rewards for what the government called their outstanding performance among their colleagues in the state-owned primary and secondary schools across the 20 local government areas of the state.

The governor of the state, Mr Babajide Sanwo-Olu, presented the cars with plate numbers already fixed and alongside some other gift items to each of the teacher and school administrator at the 2020 state’s government organised Teachers Merit Awards ceremony held at Sports Pavillion, Lagos House, Alausa, Ikeja.

The recipients who are made up of three teachers and one administrator each at primary, junior secondary and senior secondary school level and also been inaugurated as state ambassadors include Adesola Akindele, Temitope Gbadamosi, Temitope Ibiwunmi, Rasheed Odenike, Rebecca Oyinloye, Oluwaseun Balogun, Joshua Olasehinde.

Many top government officials and individuals from private sectors, particularly from the education circle, graced the occasion even as 11 other teachers, who reached the final stage of the competition from among the 3,200 applications received were given consolation prizes.

Speaking at the event, Governor Sanwo-Olu said the gesture served two purposes- rewarding hardwork and commitment on the line of duties and also encouraging others for healthy rivalry for greater service.

While commending their efforts and congratulated them on their new status, he asked them not to rest on their oars but to be more committed to duties.

He said the government believes that teachers also deserved good and comfortable living more so for their crucial roles in national development.

He said the government would continue to meet its responsibilities over all the public school teachers in the state and also ensure that education remains one of the major priority of his administration.

Speaking earlier, the state commissioner for education, Mrs Folasade Adefisayo said the finalists would be showcased and exposed to multiple opportunities which would enhance the vision of the state in restoring the prestige of the teaching profession.

She disclosed that an independent panel of judges who are mostly from the private education sector with Mrs Lai Koiki, CEO of Greensprings Educational Services Ltd as the chairman and Mrs Funke Fowler-Amba, Mrs Yinka Ogunde, Mr Idris Adetutu, Mrs Abisola Obasanya, Mrs Sherifat Ogboye, Miss Oyindamola Egbeyemi as other members screened all the applications at different stages to arrive at the 12 winners, thanking them for the well-done job.

Responding on behalf of all the awardees, one of them, Mrs Ovinuyon Buhari, thanked the government for the rewards, saying it is really a dream that came true.

She, however, promised that they won’t relent in ensuring qualitative teaching is retained in Lagos schools.

In spite of the huge investment in the water sector by the government and international organisations, water scarcity has grown to become a perennial nightmare for residents of Abeokuta, the Ogun State capital. This report x-rays the lives and experiences of residents in getting clean, potable and affordable water amidst the surge of COVID-19 cases in the state. Lagos govt rewards 12 teachers with cars, says they too deserve good living

Many killed, others injured as suspected herdsmen attack Ebonyi communities