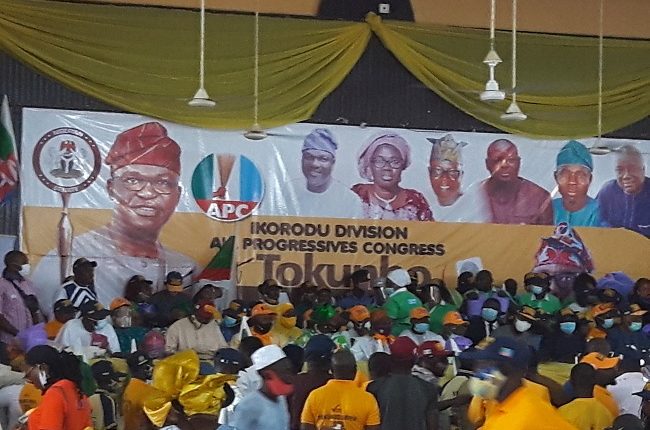 It’s a homecoming for the candidate of the All Progressives Congress (APC) in the Lagos East Senatorial by-election, Tokunbo Abiru as party leaders, elders, members, supporters at the grassroots, transport unions, student representatives, socio-political and religious groups throng the town hall In Ikorodu division of the state to declare their supports for his aspiration to the highest legislative body in the country.

In his opening remark, leader of the party and a member of the Governor’s Advisory Council from Ikorodu division, Abiodun Ogunlewe appealed to the gathering to vote for Tokunbo Abiru in the October 31 by-election as he is undoubtedly the best candidate for the job.

He said, “I am very grateful seeing the multitude. Our presence here today is to familiarize our candidate with those of us that are yet to meet him on the person.

He is one of us and he belongs to us. We have a great task ahead of us and that is the October 31 by-election. On that day, I am sure all of us will vote for our candidate. We need to mobilise ourselves from the grassroots and nooks and crannies of the division to vote massively for Tokunbo Abiru.”

Lagos East Senatorial by-election campaign committee chairman, Hon Kaoli Olusanya advised all members to be United and work together as a team to address the complaint about Ikorodu division being marginalized.

He added, “With the different colours in display, it is certain that there is a rivalry. We want everything to come together because United we stand divided we fall. Tokunbo has come as a unified. He belongs to no group and he has come to serve our collective will.

We are more than this number. Ikorodu youths have been crying of marginalization now the party has given us the chance to represent the state at the Senate. Let us show that we have embraced it with our vote. We need a minimum score of 100, 000 votes. With this election, we want to show that we are truly ready to be represented.

We want double votes from all the wards. When we do this, it shows that we are responding positively to the complaint of being marginalized. Lagos has the vote. It has the number. Let us show that we are ready for the task. On behalf of our national leader, Asiwaju Bola Tinubu, I present to you our candidate for the Lagos East Senatorial by-election, Mr Tokunbo Abiru.”

Reacting, Abiru appreciates all the leaders and apex leaders of the party to the ward levels present at the gathering assuring that he is well prepared for the legislative work and will never disappoint the trust and loyalty he has enjoyed from the party.