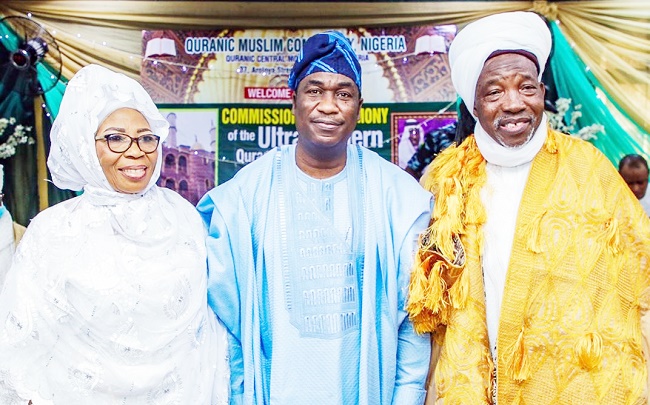 LAGOS State deputy governor, Dr Kadri Obafemi Hamzat, has called on spiritual leaders in the state to focus their sermons on the importance of personal responsibility and family values in a bid to tackle the myriads of problems facing the country.

Hamzat made the call on Sunday in Lagos at the inauguration of Quranic Central Mosque and the installation of a former Chief of Naval Staff, Vice Admiral Jubrila Ayinla (retd) and his wife, Alhaja Jemilah Ayinla, as the Baba Adinni and Amira-tul-Muhmeen of the Quranic Muslim Community, Nigeria, respectively.

The deputy governor lamented that lack of personal responsibility was becoming an issue in the country and this needed to be addressed if the country was to move forward.

Hamzat said: “A lot of people do say that the problem of Nigeria is leadership. Well, I want to say that that is 100 per cent correct in my view. The problem is that the family has broken up and there is a lack of personal responsibility in the country. Many people have left their responsibilities undone, which is having negative effects on the society and the country at large.”

He, therefore, called on all citizens, irrespective of their religion, to take personal responsibility seriously and play their roles effectively and efficiently, noting that leadership starts from the home which is the bedrock of any society.

In his paper entitled ‘Revisiting the Centrality of the Mosque and the Qur’an in Islam’, the guest speaker, retired academic, Professor Tajudeen Gbadamosi, stressed the importance of the Qur’an as a book of guidance which must be studied by all Muslims.

He urged parents to follow the guidance of the Holy Qur’an and the examples set by Prophet by taking cognizance of the fact that they have a responsibility to command their children to serve and worship Almighty Allah and keep them safe from hell.

He said they should show concern about their children’s religious commitment.

Professor Gbadamosi said there was the need to establish classes for the study of the Qur’an for the benefit of all categories of worshippers, male, female, the young, the middle-aged and senior citizens.

He stated that tutors should be engaged from reputable schools and centres across the country to teach the people in the centre.

Earlier, the Vice President, Quranic Central Mosque, Lagos, Alhaji Shakirudeen Olatunji Giwa, disclosed that new mosque was originally built in 1877, rebuilt in 1987 and now reconstructed to modern standard through financial support received from members and non-members of the mosque.

He expressed appreciation to all who stood by them when renovation work was ongoing and thanked members of the “Working Committee” who devoted their time and energy to achieve the “remarkable feat,” stressing that the organisation would continue to seek support for the propagation of Islam.

While congratulating the president of the organisation, Vice Admiral Jubrila Ayinla (retd) and his wife, Alhaja Jemilah Ayinla, on their installation as the Baba Adinni and Amira–tul-Muhmeen of the Quranic Muslim Community, Nigeria, respectively, Giwa noted that the installation was in recognition of their immense service and support for the organisation and to further serve as an impetus to do more.

In spite of the huge investment in the water sector by the government and international organisations, water scarcity has grown to become a perennial nightmare for residents of Abeokuta, the Ogun State capital. This report x-rays the lives and experiences of residents in getting clean, potable and affordable water amidst the surge of COVID-19 cases in the state…Lagos dep gov  Lagos dep gov

The Lagos-Ibadan railway was inaugurated recently for a full paid operation by the Nigerian Railway Corporation after about a year of free test-run. Our reporter joined the train to and fro Lagos from Ibadan and tells his experience in this report…Lagos dep gov  Lagos dep gov