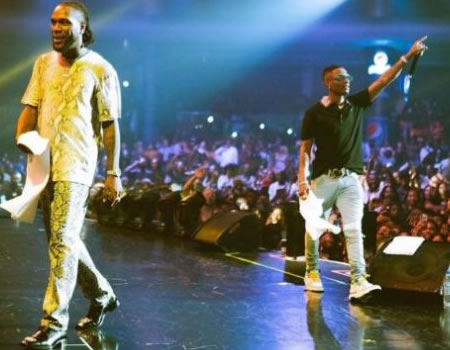 Share
Two shows were top on our Yuletide list and Burna Boy’s Christmas day performance was not originally part of it. However, my wife and daughters were keen. Majority rules in our house and I caved in. I made arrangements for six tickets, including one for my driver, who was just as ardent about the show.
In the past, I normally would purchase table tickets for astronomical sums as my humble way of going the extra mile to support our own but for some reason this time, I simply opted for alternative tickets much lower in price compared to table seating. My intuition was rewarded when on arrival, it turned out that tickets had been oversold. There were no seats for a significant number of people. Worse, the available seats were not numbered. A free for all showdown was inevitable and the scene descended into chaos. In fact, getting into the venue in the first place- Eko hotel convention centre was the first sign of trouble.
By the time the African giant came on stage at past midnight with a performance for the ages, the only way to catch a glimpse of him was to stand on chairs. Decorum be damned, I hopped on mine like everyone else. It was an electric performance. Burna Boy dazzled with a stage command fit for a Grammy performance! The skirmishes of getting in, finding a seat and standing on chairs were momentarily forgotten as the crowd danced and sang along. His rendition of Fela Anikulapo Kuti”s protest song on social inequality and injustice was particularly stirring. His act fulfilled all the things I look out for in any outing I decide to attend – a masterful fusion of entertainment and enlightenment. He delivered!
In the heat of the performance a scuffle broke out in the high end section of the hall reserved for the million Naira paying audience with tables. Punches flew and landed on bodies. My initial presentiments about safety and security in these shows returned and I instinctively turned to ensure my wife and teenage daughters beside me were alright. A sane man, thinking on his feet hastily tried to clear the bottles on the tables as an enraged heavy chested bully reached for one. It was all downhill from there.

I could not help but sympathise with those who went out of their way to support the outing by paying for tables that ranged from N2m to N5m as their view became obstructed with fist fights. Nor was it hard to miss the distraction the ensuing fiasco wrought upon the performer we all came to see as his gyrations faltered and his troubled eyes wandered across the hall. So much so that his mother, who was present in the room had to discreetly make her way to the back of the hall to have some words with security.
Here is my message, Dear Lagos concert organisers, please take your audience as seriously as we take you! Our artists have placed us on the global map. They have done so much for Nigeria’s image, as I have noted in a previous article. We see them, we hear them and we reciprocate by coming out to celebrate and support them. We should be treated with as much respect by the organisers. As the saying goes, the devil is in the details, including something as basic as signs pointing to the restrooms so that people do not have to wander around the premises trying to figure out where to relieve themselves.
Lagos is fast becoming a Mecca for home and international artists to perform. It is incumbent on organisers, sponsors and hotels were these events are being hosted to emulate their European and American counterparts. It is one thing to admire international concerts or invite foreign artists to Nigeria but, it is a whole different ball game to follow through with that level of planning an organisation. They must go hand in hand. If we must copy, then we must copy well, while adding our own unique flavour to the mix. And our flavour should not be the negative. I have attended a concert in America, in a hall that sits over 15,000 people and we were all out of the premises in a jiffy after the performance. Meanwhile, at the Burna Boy concert, it took ages for the audience to leave the hall which seats about 6,000 people and almost an hour to drive out of Eko hotel because there were no wardens to direct traffic. Show over, everyone was left to their devices.
The Nigerian audience who are using their hard-earned money to support Art should be respected. I cannot emphasise reciprocity enough. High tables, low tables, VIP, standing sections, whatever level of fees, anyone that commits to a ticket deserves better and should not be relegated to contending with shoddy logistics. We must take each other seriously. Every one matters!
The venue should be easily accessible. Seats must be made available for any amount paid. Tickets should have seats numbers. The restroom should easily accessible. The access walk must be cleared of any obstacles. It is also very important that safety protocols are announced intermittently in the course of the event. Emergency incidents must be factored in. Presently, the various protocols for such an exercise insufficient. Placing a turnstile in the entrance can also impede evacuation in the event of a fire or other emergencies. This isn’t peculiar to Eko convention centre, it is common trend in many indoor and outdoor event centres that hosts crowds.
This write up is call to action. Concerts and event organisers as well as government  regulators should pay close attention to even the tiniest detail. Accidents do not send or announce themselves beforehand with a letter of intent. We might get away with it for a zillion years but when it does happen, I can assure you from experience that the outcome will be fatal. If in doubt, ask Boeing.
Nevertheless, thumbs up to Burna Boy for a jaw-dropping performance. He gave his audience a very merry Christmas!
• Comrade Peter Esele is former President of Trade Union Congress of Nigeria.

PENGASSAN expresses concern over state of the nation

Oloyede: The return of ‘professor of integrity’