...as APC governorship candidate woo them for votes 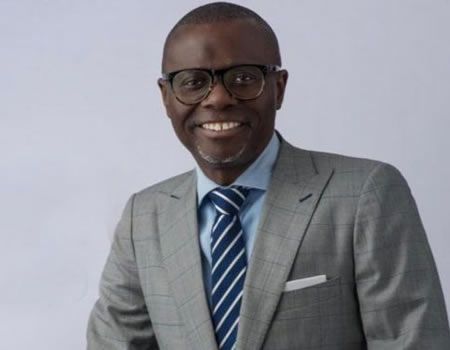 A large crowd of people comprising majorly Lagos State civil servants and some other supporters of the ruling All Progressives Congress (APC), on Thursday at the Adeyemi Bero Auditorium premises within the Government Secretariat, Alausa, Ikeja, scrambled to receive their share of a trailer load of branded bags of rice provided by the gubernatorial candidate of the party, Mr. Babajide Olusola Sanwo-Olu.

Sanwo-Olu, along with his team, had, as part of his campaign and sensitization drive, come to the Secretariat to woo the civil servants for votes.

Among other things, the APC governorship candidate promised to implement the N30,000 minimum wage as earlier agreed between the Federal Government and Labour, if voted in as governor, in a poll exercise holding on March 9th, 2019.

The sharing of the branded 10kg bags of rice, on which Sanwo-Olu picture appeared, which was high point of the event, almost got out of hands as many scrambled to receive theirs, with few of them alleged to have sustained injuries in the melee that ensued.

This was just as some more ‘outsiders’ trooped into the Secretariat to benefit from the largesse, were shut out by policemen on duty, who were already having a tough time controlling the crowd, and sensing that the situation could become uncontrollable, as they locked the two gates leading into popular auditorium.

“They (policemen) have to appeal to the crowd to comport themselves and be orderly as them to queue up by forming straight lines before the sharing of the bags of rice could continue,” a source said.

However, those present, findings showed, had remained undaunted as they waited to collect their bags of rice, while others who were willing to leave, were trapped temporarily within the premises as the police were said to have refused to open the gates for fear of a stampede.

Stay away from Ogun or be disgraced, Amosun warns NLC leadership