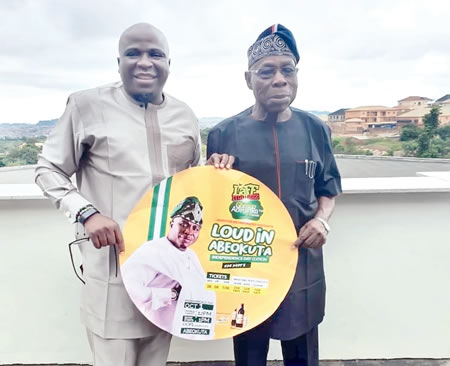 As residents of Abeokuta and its environs wait in anticipation for the Laffmattazz comedy and music show, former President Olusegun Obasanjo has thrown his weight behind the event, lauding the convener, Gbenga Adeyinka, for promoting love and sharing happiness through the event.

Adeyinka, who visited Obasanjo on days back to receive his blessings for the event, described the visit as one that would add a bigger voice to the event that is set to parade some of the reigning music stars and comedians.

The event, which is rated as one of the most talked about comedy shows in the South-West started with Ibadan edition in April, moved to Ilorin, Kwara State and would now land in Abeokuta, Ogun State, for the next leg of the show that always seeks to give back to the people through music, fun and excitement.

Speaking about his expectations, Adeyinka said the show would once again give back to the people in a special way with music, dance, comedy and excitement being the order of the day.

He added that lucky people would also go home with cash gifts and other prizes.

Case for the creation of states on linguistic bases

APC has multiplied miseries in areas where PDP failed —Olafeso