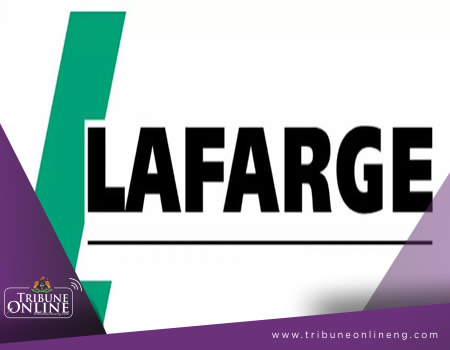 LAFARGE Africa Plc, a leading Sub-Saharan Africa building materials company and a subsidiary of LafargeHolcim, has recorded profit after deduction of tax of N5.2 billion for the first quarter 2017 financial year.

In its financial statement submitted to the Nigerian Stock Exchange (NSE) on Monday, Lafarge Africa Plc announced that the company’s profit after tax increased from N1.9 billion recorded in the first quarter of 2016 to N5.2 billion in 2017, just as the net sales improved by 55 per cent from N52.4 billion in Q1:2016 to N81.3 in Q1:2017.

Speaking on the result, Michel Puchercos, CEO of Lafarge Africa noted that the turnaround plan of the company continued to deliver strong results in Q1 2017, in spite of the challenging environment in Nigeria & South Africa.

“In Nigeria, domestic cement volume improved by six per cent compared to last quarter, thanks to seasonality, however the market declined compared to last year due to the recession that started in Q2 2016.

In South Africa, the activities were affected by lower volumes in the cement division, despite the price increase from last year. The company continues to focus on cost optimisation, to restore profitability.

Looking forward however, Puchercos noted that the company was on track to deliver its ambition for 2017 and maintained outlook for the cement demand growth of zero per cent to two per cent for Nigeria.

During the quarter, the company advanced in its investment for the Ashaka CPP, initial work for our AF and coal development and completion of the Mfamosing line II.

Net debt of the company remained stable at to N107 billion, while total capital expenditure in the quarter reached N9.1 billion.