Labour protests in Benin, slams govt over increase in utilities 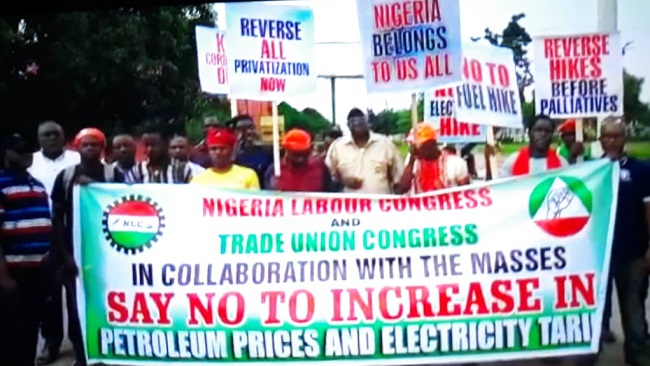 Notwithstanding the suspension of the nationwide strike by the organised labour, members of the Nigeria Labour Congress (NLC) and Trade Union Congress (TUC) on Monday took to the streets of Benin to kick against over the recent hike in electricity tariff, fuel and Value Added Tax (VAT).

With slogans like “No to Electricity Hike”, “No to Fuel Hike”, “Kill Corruption” amongst others, the protesters who assembled at downtown Ring Road slammed the government for increasing the price of fuel and electricity tariff.

Led by the former presidential candidate of the National Conscience Party (NCP), Dr. Osagie Obayuwana and the state NLC chairman Mr. Sunny Osayande, they insisted that they will embark on a total strike if the government refuses to reverse the increment in two weeks.

Obayuwana said: “We say no to the increase in electricity tariff, fuel and VAT. We say no to privatisation where our wealth is given to a few persons. They are just buying time but before you know it, two weeks will come and go.”

Speaking in the same vein, Osayande said that the union decided to embark on the peaceful march to express its displeasure over the manner the union called off the strike.

The chairman warned that in the event that the government refuses to listen to the grievances of organised labour in two weeks time, it will have no choice but to embark on a total strike.

The unionist added: “We took to the streets to tell the masses that what the Federal Government brought is nothing. The hike in VAT, fuel and electricity tariff should be reversed within two weeks, if not we will go on strike.”