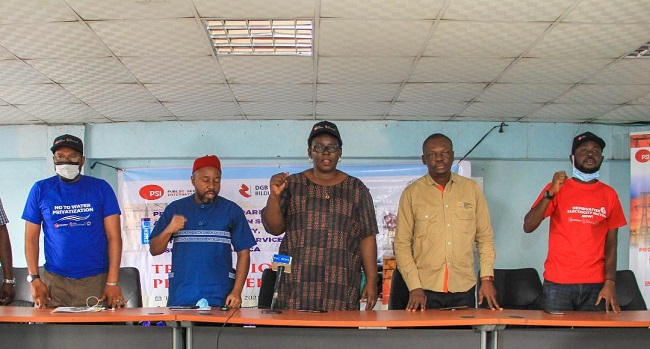 Labour and civil society groups have called on the Federal Government to jettison privatisation in the nation’s power and water sectors and instead, sustainably fund the sectors while building the capacity of the workers in the sector to improve service delivery.

At a Trade Unions’ Press Briefing with the theme: ‘Promoting Transparency and Decent Work in Supply Chains in Electricity, Water and Waste Services in Sub-Saharan Africa’, held in Lagos on Tuesday, December 21, 2021, the Amalgamated Union of Public Corporations Civil Service Technical and Recreational Services Employees (AUPCTRE) and the National Union of Electricity Employees (NUEE) said that the Federal Government recourse to privatisation will spell doom for workers and the ordinary Nigerian who will have to pay more for basic services.

In his intervention, National President of NUEE, Comrade Martin Uzoegwu said that the year 2021 marks the eighth anniversary of the privatisatiion of the power sector, yet the same issues that informed the government decision for privatizing have remained unsolved. Because of this, citizens and industries still do not have reliable power supply.

Uzoegwu pointed out that “even with installed capacity at 12,522 MW, the nation has not been able to generate beyond 4,000 MW, which is insufficient for the population of 200 million. Added to these are the periodic price hikes, a variety of tariffs and estimated billing.”

He revealed that electricity on the grid on November 1, 2013, when the sector was privatized was around 3,400MW. Since then, the highest peak power ever generated and transmitted in Nigeria was 5,802MW on March 1, 2021, which was evacuated at a frequency of 50.09 hertz. He also exposed the fact that power supply now has dropped below 4,000MW at a time Nigeria is supposed be generating over 20,000MW.

He noted that the GenCos have jettisoned the primary objectives of generating power as contained in their MOU to sundry businesses around the power stations.

“We can authoritatively say without fear of contradiction that some prefer these other businesses to revamping the generating machines.”

He also said that tariffs have been increased three times and the fourth imminent, a development that continues to put additional burdens on Nigerians who do not enjoy adequate power supply while generator importers continue to have a field day.

According to him, NUEE still maintains that the only workable and practicable option for resolving the issues is a total reversal of the whole privatization exercise because it is not working and cannot work. The union proposed instead, commercialization which will give the companies the opportunity to charge economic tariffs with human face considering the purchasing power of the citizens and the regulatory directives.

It will also help to solve the twin problems of funding and investments in the whole value chain of the power sector.  Commercialization will lead to reduction in unemployment, reduction in the rate of Organized crimes and other social vices, Creation of small and medium enterprises in the rural and semi-urban areas, and reduction in the cost of energy for manufacturing firms thus reducing the cost of goods and services and increase in turnover which could lead to more direct and indirect employment, among others.

Speaking on the water sector privatisation plans, Comrade Sikiru Waheed, AUPCTRE General Secretary said that access to safe and adequate water is crucial to the quality of life of the citizenry and this conviction has motivated the union to lead campaign to stop the privatisation of water.

Comrade Waheed said that privatisation will price water above the reach of the poor and lead to job losses by privatisers who are only interested in maximising profits.

Waheed drew the attention of the government to examples of cities that privatised water and reversed their decisions by re-municipalising. They include Buenos Aires, Manila, Paris, and other cities, explaining that the outcomes in those cities informed the resistance of similar moves in Nigeria.

He revealed that the controversial National Water Bill which was stepped down at the House of Representatives in 2020 was conceived by the Nigerian government to foist privatisation on Nigerians even as he frowned at the Ministry of Water Resources and some lawmakers for attempts at re-presenting the same bill which contains provisions that will ultimately dispossess Nigerian citizens of their inherited and cultural rights to water and fling the doors open to privatisation.

In his words: “The bill was stepped down by the House of Representatives in September 2020 due to widespread criticism about its provisions and the exclusion of critical stakeholders in its journey through the hallowed chambers albeit clandestinely. We were pleasantly surprised when President Muhammadu Buhari demanded speedy work on the Bill while commissioning the Zobe Regional Water Supply Scheme in Katsina State.”

Also touching on the recent Memorandum of Understanding (MOU) between Lagos state government and the United States Agency for International Development (USAID) on water and sanitation, the AUPCTRE boss described it as a secret deal that doesn’t have the blessing of labor or civil society, since according to him, details of the MOU is not in the public domain. He listed some states on the threshold of privatising their water sector, which he said the union will resist. They include Lagos, Ekiti, Bayelsa and Abuja, the federal capital territory.