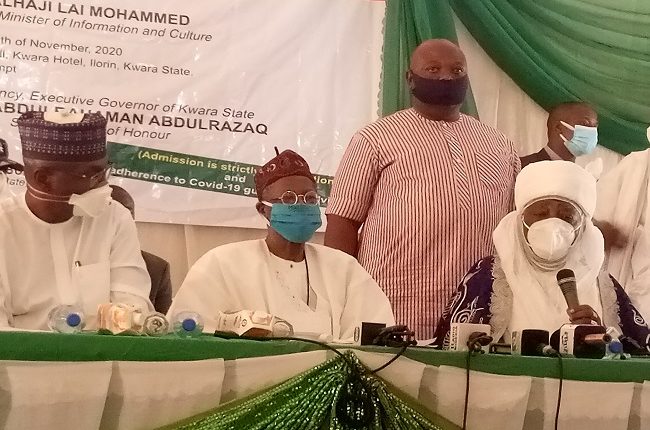 Call for quick resolution of the lingering ASUU-federal government crisis topped issues and requests made by people of Kwara state at the town hall meeting called by the minister of Information and Culture, Alhaji Lai Mohammed.

The people, who frowned at the unending friction and disagreement between the federal government and the university lecturers in the nation’s public tertiary institutions, said that, among other inconveniences, idleness created by the eight-month ASUU strike had made Nigerian youth to be ready tools in hands of trouble makers.

Leading the agitators include the Emir of Ilorin, Alhaji Ibrahim Sulu-Gambari, chairman of the University of Ilorin chapter of the ASUU, Professor Moyo Ajao, president, Kwara state chapter of the National Association of Nigerian Students (NANS), Azeez Jaji, among others like parents and professional associations.

The traditional ruler, who described the lingering strike action as “irritating”, said that children and wards of the poor parents in the country are mostly suffering the effect of the disagreement between the lecturers and the federal government.

ALSO READ: BBN Laycon partners with OPPO, kicks off with launch of A93 smartphone

“The issue of the ASUU strike is highly irritating. The poor parents in the country are those who have children in these public universities. They are the ones who suffer negative effect of the unending ASUU strike. It’s only the rich that can send their children to private tertiary institutions or abroad for studies. So, I urge the government to look into the issue and resolve it as quickly as possible. Enough is enough. It’s no longer palatable”, he said.

Also in his speech, the ASUU chairman, University of Ilorin, Professor Moyo Ajao, accused the federal government of discouraging negotiation with the ASUU leadership.

The university don, who accused the federal government of using hunger and starvation to fight striking lecturers, said that government had refused to pay their salary in the past eight months.

He also appealed to the government to be more committed to educational and youth development of the Nigerian youth.

Also, members of the NANS, who came into the hall singing solidarity song, echoed what the monarch and the lecturer said, calling for immediate and quick resolution of the strike action.

In his speech, the convener of the event, minister of Information and Culture, Alhaji Lai Mohammed, delivered message of President Muhammadu Buhari, appealing to Nigerians, especially youth, to bear with his administration in the face of daunting requests and socio-economic challenges in the country.

The minister, who reminded that the nation was just recovering from ugly effects of the coronavirus pandemic and the #EndSARS protests in many parts of the country, said that the federal government is committed to educational, economic, security and youth development, among other areas of growth to serve people better.

Alhaji Mohammed said that population explosion is part of the challenges facing the nation’s socio-economic development, as against fewer population figure of the past, added that the government would not rest on its oars at making life better for the citizenry.

Speaking on the lingering ASUU-federal government disagreement, the minister said that moves are on to put an end to the strike action, adding that the ministers involved and the ASUU leadership are still working towards amicable resolution of the matter.

On continued border closure, he said that the closure was not aimed at inconveniencing Nigerians, especially women, adding that border closure also had to do with the nation’s security issues, health, promotion of local industrial growth and economic development.