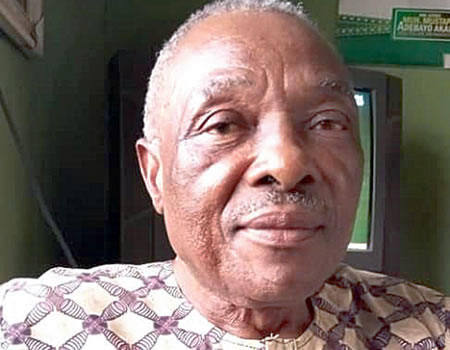 Mr Michael Ologunde is the secretary of the Alliance for Democracy (AD) in Kwara State. He speaks to BIOLA AZEEZ on the dust raised by the recent demolition of a disputed land on which Ile Arugbo was built by the late strongman of Kwara State politics, Olusola Saraki and other matters affecting the state. Excerpts:

Would you say the new administration has lived up to expectations?

Yes, of course, the administration has lived up to people’s expectations, even up to 75 per cent. I am saying this because of the efforts made so far to retrieve misappropriated funds, lost property and all that the past governments have stolen in this state. I give kudos to the governor, the [Economic and Financial Crimes Commission] EFCC and members of the state House of Assembly. They have done a very good job.

What is your take on the demolition of Ile Arugbo by the state government?

In the first instance, Ile Arugbo is a phantom name. We don’t know it as Ile Arugbo (a house for the aged). They are only trying to link it up with the aged. We have always known it as Ile l’oke and it is not owned by the Saraki family. It is a fabrication by their supporters. In 1985, or ‘86, there was a structure at the back of the Ministry of Works; the contractor handling the building then is the present Ohinoyi of Ebiraland, King Ado Ibrahim. How Saraki came to own it, we don’t know. Moreover, no state government will be so naive to reclaim any land owned by Saraki if he had his papers. Let him tender the papers in court. Not tendering the documents in court would be tantamount to robbing the state.

Many critics of Governor Abdulrahman Abdulrazaq believe that the reason for the demolition is the age-long political rivalry between Saraki and Abdulrazaq families.

That is not true. Now, going deep into history, Saraki should be grateful to the Abdulrazaqs because the governor’s father, Folorunso Abdulrazaq, encouraged Dr Olusola Saraki into politics. Dr Olusola Saraki’s father actually introduced his son to politics through Folorunso Abdulrazaq, a lawyer. Before then, at all Kwara State political structures were in the hands of Kwara South and Central, talking of Baba Ekunrin of Oke Ode, J. S. Olawoyin of Offa, Sule Maito of Ilorin. These were the people controlling Kwara politics. They were good and they were progressives. Lawyer Abdulrazaq was on the other side and was in control of parts of Ilorin. The period afforded him the opportunity to introduce Dr Olusola Saraki into politics. In a nutshell, the rightful political strongman of Ilorin is Lawyer Abdulrazaq. So, to say that it [the demolition] was borne out of an old political rift is to miss the point. The governor is fighting for the masses. The property doesn’t belong to his [Saraki’s] father or Ilorin but to the government and people of Kwara State. The people are only asking for what belongs to them through the governor.

Yes, that is how it should be. What about Shonga Farm and Kwara Football Academy? We expect members of the House of Assembly to work on those, too. They were established with state funds. The Kwara people are not benefitting from the ventures. I paid N10,000 to obtain a football academy form for my son. Yes, there are more properties in individuals’ hands to be recovered.

But the critics of the present administration are asking why it is concentrating on Saraki.

This man should be allowed to work. He has to do what he is doing. We need money to execute projects. How can one man own properties all around? He [the governor] is not biased. He is doing what is right for the people.

How would you want the people of the state to react to the activities of this administration?

I expect the average Kwarans, and even the majority of the people, to support the governor because we have lost a lot in the past. People have been deprived of their rights. How can a family dominate a whole state and produce whoever they like to govern the state? In the light of this, Kwarans should give kudos to the present administration. We should see the governor as someone who has come to rescue us.

Aside from recovery of properties, which areas of governance and development would you want the government to focus on?

I had expected the governor to automatically agree to pay the minimum wage of N30,000 because civil servants are suffering. More so, this is a civil service state. It is civil servants’ money that trickles down to others. So, it is affecting all of us. Two, I want this government to focus on education – quality education. If everyone is educated, we will see the light and we will able to stand by the truth. The education I am talking about does not mean for white-collar jobs alone but for other areas of life in order to be self-reliant. Also, agriculture should be faced squarely because without food, we can’t survive. We need food sufficiency. And agriculture, as we see it, is very wide as it can provide job opportunities for the teeming youths. The issue of qualitative health care is important and it should experience much improvement over the past governments. A situation where you just have a cottage hospital with no equipment, personnel or drug is absolute rubbish. I even expect the state government to research into solar power system to provide lights augmenting the Federal Government’s electricity supply system.