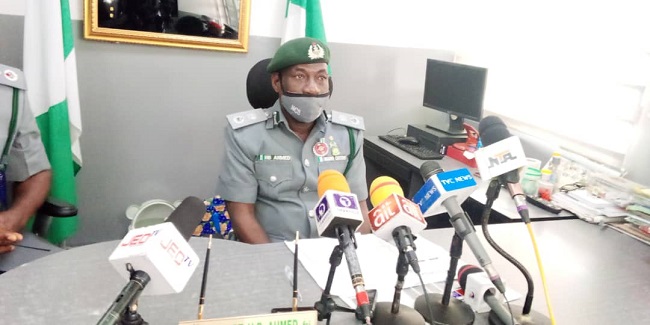 Kwara State Command of the Nigeria Customs Service has generated and remitted a sum of  N 9,310,734,065.11 billion in one and half years into the federation account.

Speaking with journalists in Ilorin, on Tuesday, the customs area controller Hussaini Ahmed, said that the command generated a sum of N6.9 billion between January and December 2020 representing 86 per cent of the year annual target, “as against N2.4 billion in 2019.”

Comptroller Ahmed, who said that COVID-19 pandemic that came with lockdown, EndSARS protests and partial border closure were the reasons for not meeting the stipulated last year budget, added that placement of temporary embargo on the movement of goods and persons through the land borders nationwide was another reason.

According to him, the seizures include 3,551 bags of foreign parboiled rice, 51 used vehicles of various make, 3,543 kg of marijuana, 225 kegs of vegetable oil and 30 Jerri cans of PMS.

The Comptroller reiterated his commitment to ensuring that smuggling activities become unattractive through vigorous community and public enlightenment, sensitisation on the dangers of smuggling and its impact on the economy and national security.

He appealed to well-meaning members of the public who are ready to engage in legitimate business to come forward for clarification or visit the Command headquarters for trade facilitation and other enquiries.

To the recalcitrant ones bent on engaging in the illicit business of smuggling, Bello warned that they would not escape the long arm of the law, adding, “We shall ensure that maximum revenue collection is realised as directed by the Comptroller General of Customs, Col Handed Ibrahim Ali (rtd), on suppression of smuggling activities, blockade of revenue leakages without compromising national interest and security of the nation.”

He also recalled the unfortunate 2020 episode when the Command came under attack by hoodlums disguised as EndSARS protesters with an obvious intention of looting and setting the Command and government properties ablaze, adding that during the mob action, two of the officers of the Command were injured, while 27 motorcycles and two Keke Napeps meant to move goods out of the command were seized and two suspects also arrested.