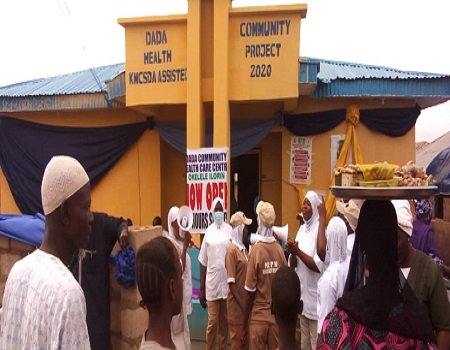 World Bank-assisted Kwara State Social and Community Development Agency (KWSSCDA) has commissioned what is described as the first health centre ever in Dada community, Okelele in the Ilorin East local government area of the state.

Dada community is as old as Ilorin, the capital of Kwara state.

The development made the long-suffering people of Dada community heave a sigh of relief, as they expressed excitement over accruable benefits of the health project.

The new health centre was facilitated by the World Bank- assisted KWSSCDA, while Dada community-contributed 10 per cent of the project’s cost.

Speaking at the ceremony, the state commissioner for Health, Dr Raji Razaq, restated the state government’s commitment to the wellbeing of the people of the state through the establishment of primary health facilities in all the nooks and crannies of the state.

He urged the residents of Dada community and its environs to patronize the health facility and give the health workers at the centre maximum cooperation.

Also speaking, the Director of Personnel Management, Ilorin East local government area, Prince Gabriel Oyebanji, said, “the inauguration and handing over of this health facility is a clear testimony and demonstration of the tireless efforts of Governor Abdulrahman Abdulrazaq at taking Kwara’s rural communities to new heights.

“I must commend the governor for funding Kwara State Social and Community Development Agency and creating an enabling environment for the growth and development of the state”, he said.

A representative of Dada community, Hon. Ibrahim Alabi, thanked the state government for its kind gesture.

He pleaded with the government to provide the health facility with qualified and adequate manpower.

The ceremony was graced by the Baale of Dada, the chief Imam of Dada and his lieutenants as well as representatives of Ibagun Progressive Union (IPU) led by its secretary, Mallam Abdullahi Mohammed Jamiu.

Insecurity in the North should give govt sleepless nights, says JNI