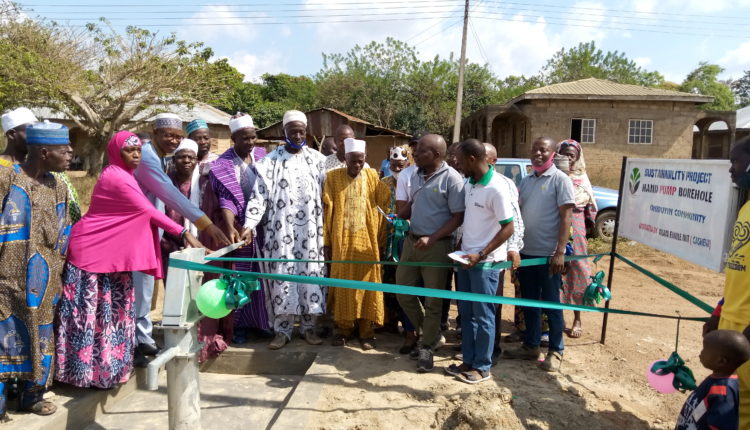 Cashew farmers in Ora community, Ifelodun local government and their counterparts in Foko-Oja and Aboto-Oja communities in the Asa local government area of Kwara State have expressed their displeasure over deplorable condition of roads leading into the rural areas.

The people, under various groups of cashew farmers in the state, said that the state of the rural roads had made movement of their produce to market difficult.

Speaking at the inauguration of hand pump borehole at Magbon, Foko-Oja and Aboto-Oja communities of the state, donated by OLAM edible nut (cashew) factory, one of the community leaders in the Ora community, Chief Amusa Ishola, called on the government to come to their rescue.

Chief Isola, who decried high cost of transporting their farm produce to markets due to situation of the roads, said that the situation had negatively affected their financial proceeds.

“We are indeed grateful to OLAM for this kind gesture which will help solve many of household and health problems in the community.

The stream where our people source for water is far, while the problem is compounded especially during the dry season.

On the issue of bad roads leading to our area, we know that help can come from anywhere. We want you to also help us plead with the government to assist us on the deplorable road condition”, he said.

Also speaking, the factory manager of the Olam edible cashew nuts factory,  Engineer Alhaji Ajibade Idris, said the kind gesture was part of corporate social responsibility to the state, adding that activities of the factory had to do with farm produce such as cashew, mango among other 48 different types of agricultural produce.

“We have good relationship with the farmers, and that is why we thought of giving them this hand pump borehole as part of our responsibility since we discover that they are having some problems with water in this community.

“My advise to the community is to make use of this borehole to ensure that the purpose of providing it is not defeated.

Engineer Idris also said that the factory had extended its gesture to their host Ogbondoroko community in Asa local government area in the aspect of healthcare services among other communities where borehole water was provided.

In his remark, Oba Akolade Adebayo Olora of Ora, Oba Olukotun Ododo, who was represented by Chief Yusuf Olatunji, expressed gratitude to OLAM for their kind gesture, while he also thanked members of the farmers’ association for the good development being attracted into the community.