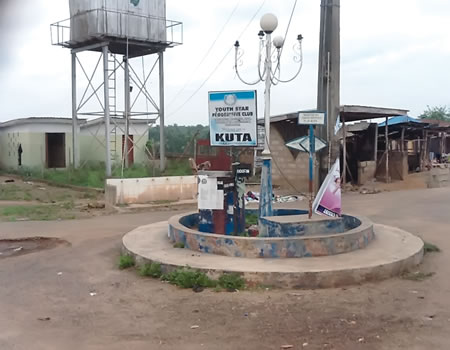 In many Nigerian homes, pounded yam with any soup remains a delicacy that is cherished. In many Yoruba communities of the South West, from Ekiti to Ilesa, Ondo, Owo, and other ancient towns, pounded yam is eaten during festivals, celebrations and it is also seen as some status symbol. At social functions, like wedding, birthday, funeral and naming ceremonies, entertainment of guests with meals may be perceived to be incomplete without pounded yam.

It is therefore not surprising that many restaurants have the meal on their list. But in Kuta, an agrarian community in Osun State, located in Ayedire local government area, it is taboo to sell pounded yam in food canteens. It also must not be hawked. Aside this, it is also forbidden to sell fried groundnuts in the rustic town. Kuta is one the major communities in Yoruba land, where Owu descendants are domiciled.

Though these are age-long taboos, their enforcements are strictly guarded by the traditional institution in Kuta. This is to avoid what an indigene termed ‘enormous calamity.’

The curiosity generated by these developments compelled the Nigerian Tribune to pay a visit to Kuta, with a view to exploring the historical background of these taboos and how residents of the community have been able to maintain this age-long observation.

Findings by our correspondent indicate that the genesis of the taboos could be traced to the progenitor of Owu Kuta, identified as Oba Akindele Anlugbua who placed a curse on any indigene, who dared or attempted to sell pounded yam and fried groundnuts in the community.

Since he forbade his kinsmen from selling pounded yam and fried groundnuts, some people who dared to flout it in the town, according to residents, had paid the supreme price through mysterious deaths.

Speaking on the taboos during an interview with the Nigerian Tribune, the traditional ruler of the town, Olowu of Kuta, Oba Hammed Adekunle Makama Oyelude Tegbosun 111 said “it is true that nobody dares sell pounded yam and fried groundnuts here in Kuta. We have been able to strictly guard the tradition and effectively ensure enforcement of among our natives here.”

He stated that “these taboos have been in existence for close to 500 years. My progenitor Anlugbua Akindele that founded Owu Kuta lived for above 200 years and when it was time for him to pass on to the great beyond, he called his children, including my great-great grandfathers. He told them that ‘I (Anlugbua) have done enough and going to rest.’

“He subsequently mounted his horse with his wife and was accompanied by his dog because he was a great hunter. Anlugbua directed his people to escort him to a particular place. He said anytime they needed him in time of trouble, they should call him and he promised to answer them. When they got to that particular spot, which is still there in Kuta today, he descended into the earth or ground in a mysterious manner.
“His wife transformed into a river at that same spot and we now refer to that river as Odo Ayaba (Queen’s River). The chain that he put round the neck of his dog was there and it is still there now. You can even visit the place to see the chain. Then, his horse climbed a tree. If we have good preservation technology, we would have preserved the footprints of the horse because these footprints were still there on the tree up till 1986.

“Few months after Anlugbua descended into the ground, some of his children and people generally went on drinking spree. They were extremely drunk and said ‘this man that descended into the ground told us to call him.’ They started querying the sincerity of Anlugbua’s promise to answer them in time of need. They asked ‘have you ever seen a man who passed on and comes back to life’.

“Some of them said that they should not doubt him, while others insisted that they should try him to find out if he would answer them. So, they went to that spot where our progenitor descended into the ground. The village then was bubbling with people selling pounded yam and fried groundnuts in the market and other places.

“They pulled his chain and called him and behold he came out from the ground and he called his dog, whose colour had turned black. He mounted his horse and started coming into the village. As he was coming, he thought there was a war, which made his people to call him. There and then, he started beheading the people he sighted along the way.

“When he got to the village’s square, he saw a gathering of people where they were selling pounded yam and he thought they were part of the presumed enemies and started killing them. In the process, the yam peel slipped the horse. As the horse struggled to get up, the shell of fried groundnuts got stuck in its hoof.

“At that point, Anlugbua was forced to stand on his feet and he then took a look at the victims of the presumed war and saw Owu tribal marks on their faces. He was shocked and he exclaimed ‘so they are my children.’ Then, he asked them why they called him when there was no war or problem.

“Just like the Jews, who always doubted their prophets, our people doubted Anlugbua. He said they had wounded his horse and from then on, none of them would sell pounded yam and fried groundnuts in Kuta. Whoever did would die a painful death like the people that had made him kill in error. Then he said henceforth that when they call him in time of trouble, he would not appear but would tell them what to do and how to go about their problems.”

He, however, disclosed that “we have made it a point of duty to annually appease Anlugbua at that spot, where he descended into the ground.”

When asked if anybody had flouted the taboos since then, the traditional ruler stated that “for record purpose, one of my predecessors, whose name would not be mentioned flouted it. The corpse of the king melted as water.”

When Nigerian Tribune visited some food vendors in Kuta and demanded to eat pounded yam, the responses of the operators were uniform as they said nobody ever dares sell pounded yam in the town.

One of the food canteen owners, Mrs Kehinde Nafiu, who spoke with the Nigerian Tribune said, “we don’t sell pounded yam here at all. You can never find any food seller, who will pound yam to sell in our community because it is a taboo, which nobody no matter how highly placed can disregard.”

According to her, “I sell rice, beans, fried plantain, amala, eba. But, as regards pounded yam you are talking about, I dare not sell it because it is a strong and fearful taboo in Kuta.”

Similarly, 85-year-old Pa Samuel Makinde, stated that “it is true that people do not sell pounded yam and fried groundnuts here in Kuta. These are taboos that I grew up to meet. Though, I don’t know what informed them, but our people will never dare to flout them.”