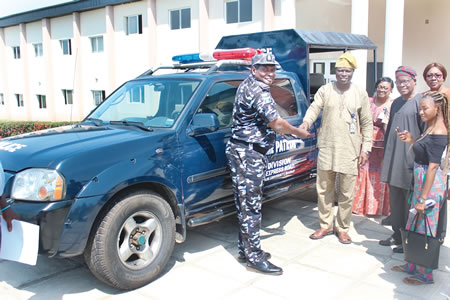 As part of its Corporate Social Responsibility, KolaDaisi University, Ibadan, has donated a patrol vehicle to the Moniya division of the Nigeria Police in order to reduce crime rate, as well as to ensure security around the environment where the university is located and the state in general.

The vice chancellor, Professor Luke Kolade Ayorinde, made this known during an official handing over of the vehicle, a Nissan Frontier pickup van, to the Divisional Police Officer (DPO), Moniya division, Chief Superintendent of Police (CSP) Abioye Shittu, last Friday at the university.

According to Professor Ayorinde, the university had received enormous cooperation from the Moniya division of the Nigeria Police in the last three years and one month the institution moved to its permanent site, along the Oyo/Ibadan highway.

“We need to partner with the Nigeria Police. They are our friends and we need their protection; so, whatever we have been able to do today for the Nigeria Police is part of our corporate social responsibility towards our host community.

“We have been here for three years and a month. We have never experienced any incident of robbery attack or kidnapping or any other, even though such vices are very rampant along the Oyo/Ibadan Expressway,” the VC said.

Professor Ayorinde said that the university is also partnering with other agencies to ensure peace and security on the campus and the entire university community.

“We are going to commit the vehicle to use immediately on the Oyo/Ibadan Expressway day and night. By so doing, the incessant criminal activities such as kidnapping, armed robbery and other vices that the road is noted for will be reduced, if not completely eradicated,” he said.

He called on other institutions to emulate KDU-I’s example so that the task of policing the nation would not rest on the shoulders of the government alone.

The chief security officer of the university, Mr Adesina Salami, noted that the Oyo-Ibadan highway is very notorious and on many occasions, he had had cause to put calls through to the Nigeria Police for maximum security.

According to him, the Moniya division of the police had always complained that they didn’t have operational vehicle to effectively monitor criminal activities along the Oyo/Ibadan road, hence the reason the university deemed it fit to donate one to them to help secure the road and the institution.

‘How Nigeria got it wrong in technical education’