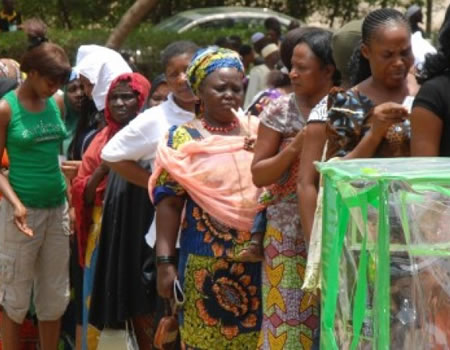 Ms Idayat Hassan, Director CDD, made this known in the group’s preliminary statement on the conduct of Saturday’s Kogi governorship election.

Hassan said that CDD’s electoral environment observation report had previously predicted that political parties would use fake news during the election to cause confusion.

“Some of the fake news circulated today include the disqualification of the PDP candidates, false results, fake images of thugs arrested and snatching of ballot papers.

“CDD fact-checkers were able to debunk most of the fake news.

“The hoaxes are mainly intended at delegitimising INEC and the process; again, Facebook, Twitter and WhatsApp are the leading platforms used to spread disinformation.”

Hassan said that earlier, voters across 21 Local Government Areas (LGAs) of Kogi went to the poll to elect a governor and in Kogi West, a rescheduled senatorial election also got underway following a court verdict.

She said that at the CDD Election Analysis Centre (EAC), reports have been coming from trained and accredited observers deployed across the 21 LGAs of the state.

She said that the preliminary statement was an overview of the initial findings on the conduct of the election.

She said that CDD observed use of financial inducements to affect the outcome of the election.

Hassan said that CDD also noted systematic and coordinated violent attacks at polling units and carting away of voting materials.

She said that in many polling units, observers and journalists were blocked from access and taking photographs in what appeared to be an attempt to prevent gathering of evidence of electoral malpractices.

She noted that the use of violence in the campaign and open threats of more violence in the election appeared to be a voter suppression strategy which played out on Saturday.

“In polling unit 001 in Ward 4, Dekina LGA, CDD observers reported sporadic gunfire; violent caused by rival party thugs who battled one other over control of the polling environment.

Hassan said that notwithstanding the fact that INEC enlisted EFCC and ICPC’s support in curtailing vote-buying, vote-buying was very rampant across the state.

She said that CDD observers reported that party agents in several polling units engaged in the financial inducement of voters to influence them to vote for their parties giving them between N500 and N3,000.

She said that as at 11 a.m, accreditation and voting had started in 55.1 per cent of polling units in which CDD deployed observers in Kogi.

She said that further information revealed that a good number of INEC ad hoc staff were knowledgeable and familiar with the operation of the smart card readers in some of the polling units observed.

Hassan, however, said that late delivery of materials experienced in some parts of the state was primarily due to logistics challenge and deplorable state of infrastructures like bad roads and difficult terrains experienced in the deployment of electoral materials. (NAN)

Army troops rescue octogenarian, others from Boko Haram in Borno