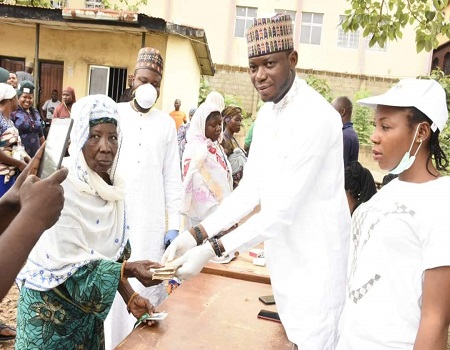 Share
THE Kogi Government through Office of the National Social Investment Programmes (Kogi-SIP), has commenced payment of N20, 000 each to over 34,456 beneficiaries of the Conditional Cash Transfer (CCT) across the state.
Mr Abdulkareem Onyekehi, the Focal Person of Kogi SIP, who spoke to journalists after monitoring the disbursement at some payment centres in Lokoja and Okene on Tuesday.
He said that the disbursement which commenced on Monday was being carried out simultaneously across the 21 local government areas of the state, saying the process has been smooth and hitch-free.
According to him, the sum of N20,000 four months’ payment from January to April 2020 is being disbursed to 34,456 CCT beneficiaries by the Kogi State SIP office in the first phase of the disbursement.
This, he said was in line with the President Muhammadu Buhari’s directive to the Minister of Humanitarian Affairs and Social Development in the national broadcast as part of the palliative measures to cushion the effect of the COVID-19 pandemic.

”The exercise which is in collaboration with the state Government spans Monday 6th – 22nd April 2020 across the 21 Local Governments of Kogi State.
”I have visited Lokoja and Okene pay points and the exercise is going on smoothly and peacefully putting smiles on the faces of the thousands of poor and vulnerable people of Kogi State in rural communities,” he said.
Onyekehi commended His Excellency, Gov. Yahaya Bello, for ensuring adequate security and support, including the presence of Senior Special Assistants to the Governor on Security for close monitoring and the peaceful exercise.
He noted that the NSIP would also be unveiling the modality for the implementation of school Feeding programme to the pupils’ households any moment from now.
Some of the beneficiaries, who spoke to newsmen said that monitored the disbursement at some of the payment centres in Lokoja, commended the government for the gesture.
A beneficiary, Mrs Hassanat Mohammed, told newsmen that the N20, 000 would go a long way to help her households especially at this point in time.
”We are grateful to President Muhammadu Buhari and Gov. Yahaya Bello, for remembering us and putting smiles on our faces,” she said.
Another beneficiary, Mrs Glory Ameh, a widow and mother of four children, said the initiative would have a great positive impact in her life and that of her children, saying, ”I am grateful to both the state and the federal governments”.
On her part, a 65-year-old widow, Mrs Aduke Obadele, said that the N20, 000 will go a long way in helping her to boost her poultry and fishery trade business, saying, ”God bless Buhari”.
Lokoja metropolis has four designated payment centres which include: Lokoja LG Secretariat, Obajana Townhall, Agbaja Post office and Jamata.
NIGERIAN TRIBUNE

COVID-19: Another patient discharged in Lagos