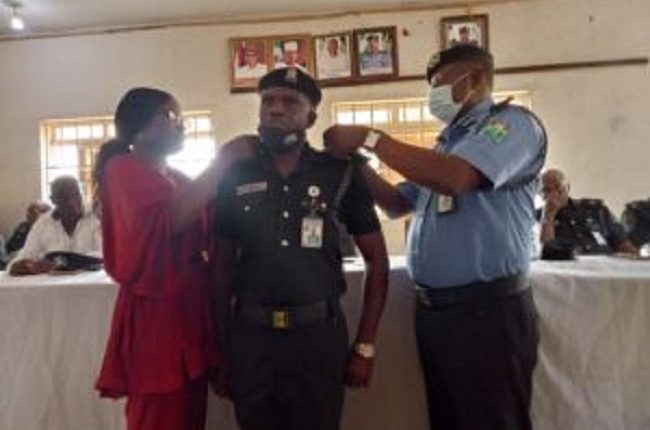 The Kogi State Commissioner of Police, Ede Ayuba, has decorated 255 Senior Police officers newly promoted with their new ranks, with a call on the officers to see the promotion as one that comes with an added responsibilities.

The Commissioner of Police gave the charge at the command headquarters in Lokoja, on Tuesday.

He welcomed the newly promoted officers to their ranks, insisting that the promotion comes with new thinking, Improve work ethics towards a better society.

While noting that promotion comes with hard work, the Commissioner of Police expressed satisfaction with the downward trend of insecurity challenges in the state as was the case in 2019, said the command is resolved to make the state a safer place to live in.

According to the CP, “By early 2020 statistics, report and comments of people plying the Kogi State highways, showed that the state was under the stronghold of kidnappers and other forms of insecurity challenges.”

CP Ede, however, expressed joy that the insecurity challenges witnessed in the past have been greatly reduced, he described it as a product of hard work, dedication to duties by men of the Command.

In the words of the CP, ” In early 2020. The kidnapping was like taking Panadol in the state. But today, I thank men of the command who have worked hard in synergy to the wake up call and the responses have shown a downward decline in insecurity in Kogi State.”

The Commissioner said the command is working round the clock to make people sleep with their two eyes closed, said the promotion by the Inspector General of Police would spur the men and Commend to do more in fighting insecurity.

CP Ede charged the promoted officers to see their promotion as a product of challenges taking to help reduce the issues of insecurity in the state which he pointed out is on a downward trend, he thanked the Inspector General of Police for confirming the recommendations made by the command to promote the officers.

The Commissioner urged those not promoted not to be despaired, pointing out that those who are not beneficiaries now would certainly make the list in the next promotion.