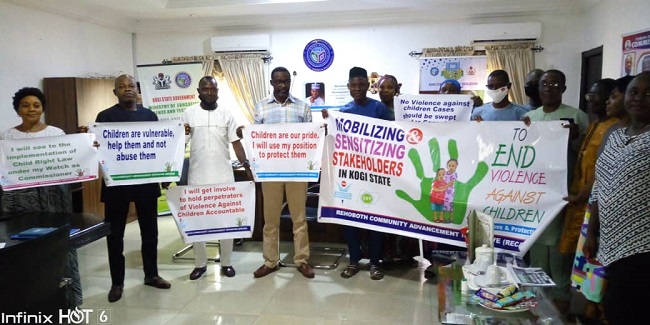 The Kogi government has pledged to reinforce the guidance and counselling department in schools to boost the fight to end violence against children in the state.

The state Commissioner for Education, Science and Technology, Mr Wemi Jones, stated this when a coalition of NGOs, the Rehoboth Community Advancement Initiative (RECAN), led by its Executive Director, Mr Abaniwo Nathaniel, paid him a visit on Wednesday in Lokoja.

The commissioner noted in the very recent past there had been an increase in the incidence of child abuse and molestation especially against the girl-child, saying it was quite worrisome and totally unacceptable.

“At the ministry, we have a role to play because most of the girls are always in our custody especially during school hour.

“The takeaway from this meeting is that there are already measures in place to ensure that this ugly incident does not happen.

As a ministry, we will reinforce those measures and introduce new ones through the provision of amenities that will discourage those incidences in schools through reinforcement of guidance and counselling section and other measures.

According to him, the guidance and counselling unit will help children discover and develop their educational, vocational, and psychological potentialities to achieve an optimal level of personal happiness and social usefulness.

So, we will do everything possible to ensure the safety of our children; we will make sure that the girl child is well protected,” Jones said.

The commissioner enjoined parents not to be afraid of stigmatisation but to speak out and come forward to report any form of molestations against their children.

”When we don’t have the reports of such cases, it is difficult to plan against them. An animal is always an animal, a man that defiles a two-year-old girl is an animal and he is not fit to live.

”We urge parents not to be afraid of stigmatisation, but to report cases of molestations against their children, so we can ensure that those perpetrators pay the full price for their conduct.

”When such happens, it will be a deterrent to future occurrences.

”So, parents who suspect or have evidence that their children have been molested should not keep it, but to come out openly and talk boldly about it to us through the guidance and counselling department in various schools.

”We are building the capacity of our teachers on a very large scale; we must ensure that learners are confined in a safe and secured environment for learning.

“Kogi ministry of education is open to specific collaborations with all relevant stakeholders to ensure the safety of our children; we will do everything possible to support our children,” the commissioner restated.

Earlier, Mr Abaniwo Nathaniel, the Executive Director of RECAN, noted that the team were a coalition of NGOs involved in a campaign tagged: ”End Violence Against Children (EVAC)” who decided to pay advocacy visit to the commissioner.

According to Nathaniel, the key issues we brought to the commissioner is the Multi-Sectoral Response of EVAC documents which was a survey done in 2014 and put together to ensure that every MDAs have their responses, and know the priority areas to focus in addressing violence against children in Kogi State.

”The area of focus of the education ministry has to do with bringing education very close to children and also to prevent violence against children in schools.

”One of the gaps we have seen in schools is the absence of data to support what we are doing today, which has made our work to be very difficult.

”Though there were reported cases but they are not reaching the right place where those cases could be effectively handled and resolved to the interest of the children.

“So, we want a multi-sectoral response to ending violence against children in Kogi State, and the ministry of education will play a vital role.

”We have over 60 NGOs under this group in collaboration with the Civil Society Organisations (CSOs) in the fight to ending violence against children in Kogi State,” Nathaniel said.

Also speaking, the Permanent Secretary of the ministry, Pastor Emmanuel Idenyi, appreciated the group for the advocacy visit, while assuring them that the ministry would continue to partner with relevant stakeholders to ensure the safety of every school child.