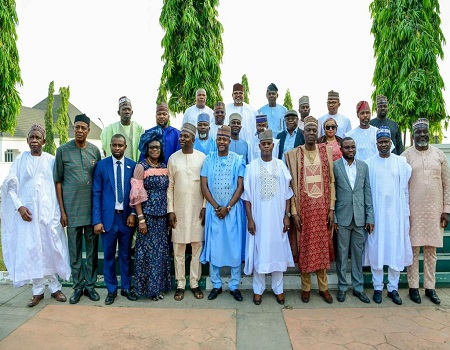 ALSO READ: Lagos-Badagry expressway to be completed in 2021 ― FG

The governor while swearing in the appointees at the Government House, Lokoja, warned them against “indulging in sensationalism”, warning that anyone that does that would be fired.

“To the new appointees, you were found in character and competence and for the returning ones, it shows you have performed excellently in your first appointment”, he said.

He charged the new appointment to serve with sincerity purpose and with the fear of God.

“Governance is all about the people and the government exists for them. As high ranking appointees, you must open your doors to your people.

Reach out, be accessible, approachable and serve the people with humility.

“I congratulate those of you who made it on Monday as commissioners-designate. If you are new to the appointment, it is because we found you worthy in learning, but above all in character.

“If you were with us in the first term, we reappointed you because you proved worthy of a second chance but also because the exigencies of time and politics, especially the zoning formula applicable in your various constituencies, permitted it.

“There are some of your former colleagues who also deserve this second chance but the circumstances were not as accommodating as in your cases, so be humble”, the governor said.

He said the newly inaugurated commissioners would form the ‘nucleus’ of his government.

“You will join me and the Deputy Governor to form the next Cabinet along with the Secretary to the State Government and other aides we may wish to receive into the Kogi State Executive Council from time to time.

In a short while, we will arrange a formal induction to familiarise you with our philosophy of governance and our roadmap. I will, therefore, limit my words to you now to an informal charge on how to operate in our New Direction Administration as we move to the Next Level to Do More” he said.

He tasked the appointees to open to scrutiny and transparent in their dealings.