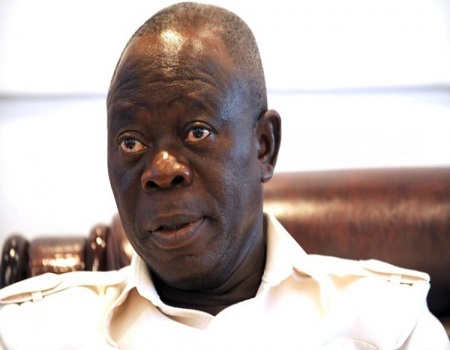 The National Chairman of the  All Progressives Congress (APC), Mr Adams Oshiomhole,  says Kogi governorship aspirants under the platform of APC have agreed to work with the party’s candidate,  Gov.  Yahaya Bello to win the Nov.  16 governorship election.

Oshiomhole, who said this on Thursday after meeting with the aspirants in Abuja,  said that the party invited the aspirants for a post-primary meeting to put issues arising from the process behind it.

“My brothers and sisters from Kogi who participated in the process have shared with us their feelings about the process and outcome.

“But I think the good thing is that I thank each and everyone of them inspite of whatever they have to say,  recognising the fact that they have to work together to win the next governorship election in Kogi,”  Oshiomhole said.

According to him,  Gov. Yahaya Bello having governed the state for four years doesn’t need to do a new apprenticeship.

“The governor will build on the experience gained and build on where we have done well.

“He will also improve on where we probably have not, so that overall after eight years,  we will be able to look back,  we point out the change between when he came in and when he left,” he said.

The national chairman said that the meeting also enabled the party to know the huge debts of salary arrears and projects inherited by Gov. Bello led-government from his predecessor.

“The conversation also enables us to amplify the fact that Gov Bello met huge debt burden.

“Debts not only in terms of salary arrears not paid by predecessor but the debt of contracts allegedly awarded. Some paid for jobs not done and we said he (governor) should try to get some of those projects completed,” he said.

Bello commended the National Working Committee of the party for inviting all its  Kogi governorship aspirants to trash out their differences to ensure the party’s victory in the upcoming Nov. 16 governorship election in the state.

He assured the aspirants that he would carry them along in his campaign and governance to better the lives of people of the state.

Bello, who reacted to the disruption of Peoples Democratic Party (PDP) primaries conducted recently, said that his administration should not be held responsible for the disruption.

“I’m not a member of PDP. We gave a level-playing field to PDP and other political parties to carry out their activities freely within the state.

“I conducted the security people round the Stadium and went round the stadium and my security chiefs in Kogi were very excellent and up and doing as far as Kogi is concerned,” he said.

News Agency of Nigeria (NAN) reports that Kogi governorship aspirants who participated in the party’s primaries,  including those disqualified to participate in the process, were present at the meeting.