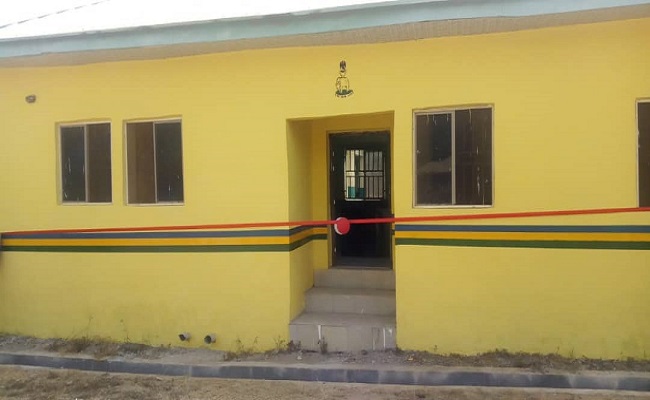 The Ogidi Community in Ijumu Local Government area of Kogi State has donated a new police station to the Nigerian Police Force.

Mr Sunday Thomas, the national President of Ogidi Development Association (ODA) handed over the station to the state police command on Sunday in Ogidi.

He said that the station was built to enhance the security of lives and property in Ogidi and its environs.

Thomas, who is the Federal Commissioner for Insurance National Insurance Commission (NAICOM), expressed gratitude to members of the community for their steadfastness and contributions to the project.

He also thanked the Divisional Police Officer in charge of Kabba, ACP Dauda Ladisi for his commitment which he said led to the completion of the project.

The president stated that the development of the community was central to its people, saying that they will not rest until they achieve Ogidi of their dream.

“By the grace of God, by this time next year, this our major township road would have been tarred. We are regaining the lost past glory of our community,” he said.

The state Commissioner of Police, Mr Ayuba Ede, while receiving the station commended the people of Ogidi community for the effort.

Ede, who was represented by the Area Commander of Kabba, ACP Dauda Lasisi, said that new station will enhance the effort of police to combat crime in Ogidi and its suburbs.

”The Inspector- General of Police (IGP) has been promoting and hammering on the idea of community policing, which is hinged on the relationship between the members of the community and the police.

“The idea is that there should not be any gap left for criminals to capitalise upon and terrorise the community.

”Nothing can demonstrate the spirit of community policing better than this gesture from the Ogidi community, and we so much appreciate it,” he said.

He promised that the police will ensure proper utilisation and maintenance of the station.

In their remarks, the traditional rulers of the community, the Elebu of Ogidi, Oba Michael Akande; the Olu-Otun of Ogidi, Oba Joseph Alamo; the Olojo of Ogidi, Oba Stephen Arogundade; and the Oloda-Ona of Ogidi, Baale Raphael Oloka, commended the leadership of ODA for initiating the project.

They said that the new police station will enhance the security of lives and property in their domains.

”This is what we have been praying to have in our community for years, and God has done it today,” they said.

The highlight of the event was the presentation of a paper titled ”Evolving A New Ogidi Kingdom: Prospects And Challenges” by Rev. Dr Paul Ojo, the Bishop, Diocese of Ijumu, Anglican Communion.

In the paper, Ojo said that evolvent of Ogidi into a new kingdom would require spiritual, psychological, sociological, economic and political warfare.

The bishop also said that a new Ogidi kingdom would guarantee the restoration of clans’ status and enhance faster development of the town.