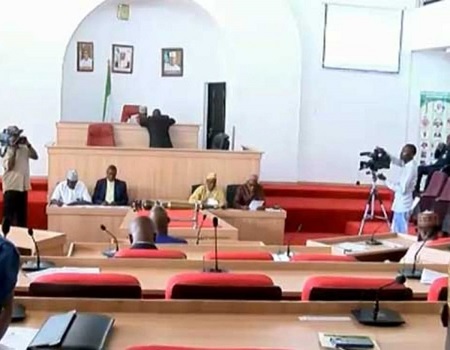 Kogi State Assembly and other stakeholders in the state have rejected castration as punishment for rapists.

Participants at a Public Hearing on a bill for Violence Against Persons Prohibition, (VAPP), also emphasised on the practicability of the bill when passed into law.

Chairman of the house joint committee on Justice and Judiciary and that of Women Affairs, Cosmas Atabor said emotions should not be part of law making process joined other stakeholders to reject castration and removal of fallopian tube for rape offenders.

He stressed that the committee would be thorough as the bill would address issues of rape, indecent dressing, incest and political violence.

Barrister Atabor assured participants at the public hearing that the committee would ensure a near perfect law as the bill when passed into law would affect persons positively for those on the side of the law and negatively for those against the law.

In a presentation, the Commissioner for Women Affairs and Social Development, Hajia Fatima Kabir Buba said the proposed bill was well thought out with measures to protect women, children, the vulnerable and persons living with disabilities.

She said the bill would mitigate all violence against persons as her ministry had proposed castration and removal of fallopian tube for rape offenders.

The Chairperson Challenge Parenthood Initiative, Eunice Agbogun, who is the initiator of the bill appreciated the Kogi State Assembly for considering the proposed VAPP bill noting that when passed into law it would protect vulnerable people and correct some immoral practices in the society.

A lecturer, Moses Etina while observing that the bill should accommodate alternative dispute resolution said it should not be left on the table of Government alone as non governmental organisations should be able to use it to source for funds from donors to help victims.

Representative of Lokoja Goodwill Widows Association, Elizabeth Adegbola, who endorsed the bill appealed for the inclusion of prohibition of violence against Widows.

On his part, the Executive Director, Conscience for Human Rights and Conflict Resolution, Idris Miliki said the structure of the bill was inconsistent as it is a gender bill referring to violence against both sexes and not just violence against women.

Also representative of the Federation of International Women Lawyers (FIDA), Christiana Adejumo, advocated the setting up of a trust fund for the victims and commended the drafters and sponsors of the bill.

The party also said that immediately the Caretaker/Extraordinary Convention Planning Committee was put in place after the NWC’s dissolution, the crises that had characterised its affairs were laid to rest….

The Emir of Zazzau, in Kaduna State, Alhaji Shehu Idris has died in his palace at the age of 84…castration of rapists

His son, Aminu Shehu Idris, confirmed in an interview with the Tribune Online that his late father who was appointed on 15th February, 1975 and spent 45 years in the throne died on Sunday after a protracted illness….castration of rapists