‘Kogi, Anambra, Rivers, 27 others to experience severe flooding from July’ 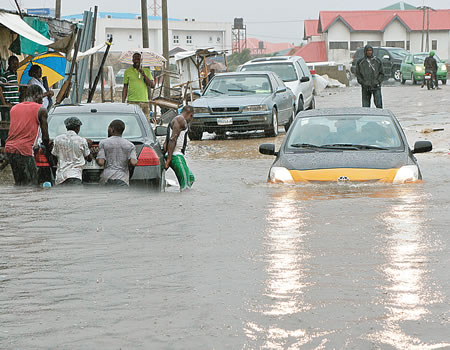 AT least 74 local government areas in 30 states in Nigeria will experience severe flooding in June, July, August and September, the nation’s hydrological agency has said.

This is as the agency said another 279 local government areas would experience minimum flooding across the country within the period, the News Agency of Nigeria (NAN) reported.

“The implication is that we should begin to take measures to avert this disaster. We are predicting that this will occur between June, July, August and September.

“The flooding will be helped by inflow of water from the trans-boundary in River Niger and River Benue,” Nze said.

He attributed the flooding to climate change and other man-made factors, including the dumping of refuse in drains and building of structures on natural water channels.

The director-general said the workshop, organised by NIHSA in collaboration with Shell Petroleum Development Company (SPDC), sought to tackle the menace of flooding in the country.

“To this end, a detailed study has been done delineating flood zones and telling us factors that contribute to incessant flooding within the region.

“So, the aim of the workshop is to disseminate information coming out from detailed studies on the hyrdrogeological behaviour of hydrogeological areas of Anambra, Bayelsa, Imo, Kogi and Rivers states.

“We will discuss and share experience in new findings that will enrich the final submission of the report by the contractor handling the project,” he said.

SPDC’s Manager of Geosolutions, Jake Emakpor, said the company took flood management very seriously to avert a repeat of the 2012 flooding that destroyed lives and properties.

He said the flooding of 2012 had become an eye opener to the company going by the devastation to its field locations and facilities in its areas of operation.

“So, it is important for all of us to come together to continue collaborating, particularly in the area of data acquisition and information sharing,” he said.

Represented by Ugbede Williams, an official of NIMASA, Peterside said the workshop would also enlighten the minds of the people on dangers in erecting structures along natural water channels.

According to the National Emergency Management Agency (NEMA), the rainstorm and flood disaster in 2018 was the worst in six years after the 2012 floods that claimed 363 lives, displaced 2.1 million people and affected seven million people in 30 of the 36 states.

The economic losses in 2012 were put at N2.5 trillion with the severity regarded as the most harmful in 40 years.

In 2015, heavy rains, compounded by the breakdown of dams in some states, caused floods in 11 states across Nigeria between August and September.

The National Orientation Agency (NOA) had reported that 53 people died, with 100,420 people displaced and a lot of buildings and houses swept away.

In 2016, the Director, Disaster Risk Reduction Department of NEMA, Alhassan Nuhu, said no fewer than 100 people died from flooding.

According to the UN, 9,000 houses were completely destroyed. The number of livestock lost was about 26,000. At least, 38 people became victims of flood in Nigeria and more than 92,000 were without shelters.

In 2017, NEMA said that 27 states experienced devastating flood disasters, in which no fewer than 90 people died.