YINKA OLADOYINBO profiles the men jostling for Kogi State governorship from the camps of the ruling All Progressives Congress (APC) and the opposition Peoples Democratic Party (PDP), explaning why most of them seem to come from one section of the state. 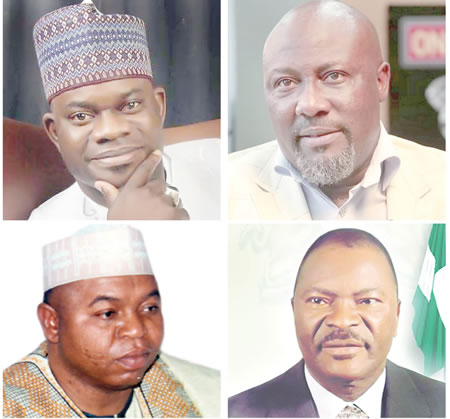 THE forthcoming governorship election in Kogi State has lightened up the political space in the state as political parties and their members have been engaging in series of activities preparatory to the emergence of candidates for the much-talked-about election. The camps of the two major political parties, the ruling All Progressives Congress (APC) and the main opposition, the Peoples Democratic Party (PDP) are particularly agog as many of their members have shown interest in dislodging the incumbent, Alhaji Yahaya Bello, at the November 16 election.

No fewer than 20 aspirants from the PDP have indicated their resolve to contest the primary of the party that has been scheduled for September 2, while the ruling party can boast of about 57 aspirants who want to occupy Lugard house after the governorship poll. It is however obvious that some, if not many of the aspirants were out to add to numbers as they are pretenders and nor contenders as there was nothing on ground to show that they are serious about the election. Only a handful of them have been going around talking to the delegates and party stakeholders on the need for their parties to choose them as the flag bearers.

It is, however, clear that some of the aspirants are ready to give the incumbent a run for his money as they have not left anyone in doubt about their seriousness for the seat. But some of them appear they are just out to be addressed as aspirants without any move or action that can make their party members and the people of the state take them serious. People in this category were said to have been hired by serious aspirants to help them fight a particular cause in the build-up to the primary. They only use the social media platforms to sell their ambition without any connection with the people in their parties.

One thing is, however, obvious in the pattern followed by the emergence of the aspirants. Most of them are from a particular section of the state, which is the Kogi East Senatorial District. Although there was no pronouncement by the PDP that it has zoned governorship ticket to the area known as Igala/Bassaland, members seem to have agreed in principle that their candidate will emerge from the area and return power to the area after four years of Bello’s administration. The same applies to the APC whose aspirants are predominantly from the eastern part of the state.

Wada is one of the frontline aspirants on the platform of the PDP that is planning to dislodge Bello from the Government House. The immediate past governor of the state lost the last governorship election to Bello, who was announced as the winner after the death of the initial candidate of the APC, Abubakar Audu. The death of Audu necessitated a substitution of candidate after which the election was declared inconclusive by the Independent National Electoral Commission (INEC).

After the legal battles that followed the election, Wada went back to re-strategise and has now come out to contest the governorship election again. The strength of the former governor lies in the fact that he is on a familiar terrain, having contested twice before. Also, having governed the state before, many believe he has garnered enough experience to survive the intrigues of primary. He may also still have his loyalists in party executive positions who will be delegates to the primary and this may help him to emerge as the candidate of the party.

He also has the advantage of the area he hails from. He is from Dekina Local Government Area in eastern part of the state. The people of the area felt short-changed by the decision of the APC that led to the emergence of Bello and they may switch their support to one of their own.

Wada’s weaknesses, however, include the perception of the people about his performance while in office as governor. Many believe he did not perform up to expectations and should not be rewarded with another governorship. Some argue that he was emboldened to come out and seek reelection by the level of performance of the incumbent.

Another problem that the former governor may face is finances. Since he will be facing the candidate of the ruling party if he eventually wins the ticket of his party, it is believed that he doesn’t have the war chest to prosecute the battle.

The senator representing Kogi West Senatorial District has also thrown his hat into the ring as the battle for the governorship seat hots up. Melaye has contested election into the House of Representatives for the Kabba/Bunu/Ijumu Federal Constituency seat and won. He is a second term senator for the district and defeated Senator Smart Adeyemi on both occasions. Despite the opposition from the state government in the build-up to the last general election, he was the only elected senator on the platform of the PDP from the state.

Melaye draws his major strength from his people. He enjoys the support of the people of the area, especially those in Okun land. He is also believed to have connection with the party leadership at the national level. Apart from this, his party, the PDP, is more rooted in the western district.

But many see him to be playing to the gallery and not serious about the governorship ambition. The party appears not keen on picking its candidate from the East and this might have automatically ruled him out of the contest. Also, his popularity among voters has not been tested beyond his senatorial district before and the governorship election will hold in the entire 21 local government areas of the state.

Abubakar is the son of former governor Ibrahim Idris, popularly called “Ibro” across the state. He is also a notable aspirant on the platform of the PDP. He is the first person in opposition camp to show commitment and seriousness about his ambition as he has toured the entire 21 local government areas, talking to party stakeholders and selling his ambition to those matter in the party. He is also believed to have the backing not his father, who is the leader of the PDP in the state. The political group loyal to his father and known as “Ibro family” is also said to be backing the aspiration of the Omala-born politician.

He is, however, believed to have drawn his strength from his father, who is a major supporter. Although, he tries to detach himself from the former governor, many know that he is the source of inspiration. Abubakar is young, energetic and has entrenched himself among the stakeholders in the state. If he eventually wins the ticket, the senatorial district he comes from may be an advantage for him. He is also said to have a deep pocket that can make him successful at the election.

However, the young Idris is a new comer when it comes to the politics of the state. This is the first time he is coming out to vie for any political office in the 28 years old state and he has never held any political office prior to this time. Besides, some people see his ambition as an extension of the political dynasty of the Idris family and this has led to agitation among members of the party.

The 44 years old Quantity Surveyor is vying for the governorship on the platform of the PDP. He is, however, relatively unknown politically as he has not contested any election or held any political post before. His support base is Idah Federal Constituency. He is alleged to be sponsored by the ruling APC. Although he is said to have the financial muscle for the election, he is not known across the state politically.

Jubrin Usman is a member of the APC seeking to send the governor packing during the November election. A former naval chief from Okura Lafia in Dekina Local Government Area of the state. We recently entered the governorship race and he has shown some seriousness about the bid. It is the general belief that the powers-that-be in the APC are planning to use Usman to tackle Bello for the ticket of the party. The move has, however, ignited rivalry in the ruling party, particularly among the supporters of the governor and those of Usman. The ex-military chief is also new in the murky water of politics in the state as he has not been involved in any political activity before now.

The strength of the Okura born politician is outside the state as he is said to be supported by some powerful people in the presidency. His military background is also an advantage for him to curb political violence in the state. Usman is also being supported by the elites in the state.

But he has no political structure across the state even within the APC with which he can fight the election. He is not visible in the state.

Mohammed Audu is the son of a former governor of the state, Abubakar Audu. The younger Audu is believed to be leveraging on the political achievements and structure of his father. He is also from Ofu Local Government Area in the Kogi East Senatorial District where a large chunk of votes comes from.

He is believed to also have a strong connection with power brokers outside the state. Mohammed also has the financial resources to bankroll the campaign.

His weakness includes the fact that he lacks personal understanding of the state. Besides, many people believe he needs to be close to the people as he is said to be cut off from them.

The former Director-General, NASRDA is also contesting on the platform of the APC and seen as newcomer in the politics of the state. It is being said that he has no political structure in the APC that he can use to fight.

The former NFF chairman is seen to be politically unpopular and he is said to seek to leverage on his relationship with the Presidency. He doesn’t have political structure in the party and the state.

Aeroplane “driver” and our free fall