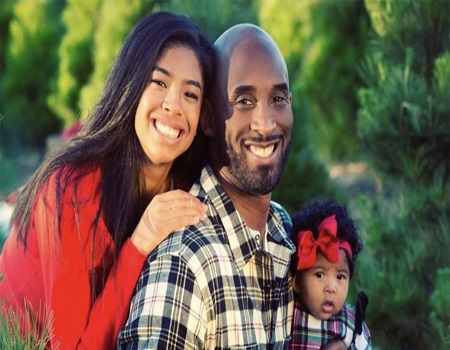 Kobe Bryant’s wife, Venessa Bryant on her Instagram page on Wednesday posted an emotional tribute to her late husband, Kobe Bryant and late daughter Gianna, also known as GiGi days after the Helicopter crash in southern California that killed both her husband and daughter.

The post reads:
“My girls and I want to thank the millions of people who’ve shown support and love during this horrific time,” she wrote, alongside a family photo. “Thank you for all the prayers. We definitely need them.”

Vanessa added that the family is “devastated” by Kobe and Gianna’s death, as well as for the families of the seven other people who lost their lives in the crash on Sunday.

“I’m not sure what our lives hold beyond today, and it’s impossible to imagine life without them,” she continued. “But we wake up each day, trying to keep pushing because Kobe, and our baby girl, Gigi, are shining on us to light the way. Our love for them is endless — and that’s to say, immeasurable. I just wish I could hug them, kiss them and bless them. Have them here with us, forever.”

She also requested that her family be given respect and privacy as they navigate this new reality. she concluded her post by explaining that Mamba Sports Foundation is set up to help give support to other families affected by the tragedy.

Venessa also changed her Instagram profile photo to a picture of the whole family, her Instagram account which was private before was also made public on Wednesday.

The Bryant family members and seven others were killed Sunday when a helicopter crashed into a hillside in dense fog in Calabasas, California. The helicopter was flying in foggy conditions considered dangerous enough that local police agencies grounded their choppers.

Kobe Bryant is survived by Vanessa and their three daughters, Natalia, 17, Bianka, 3, and Capri, who was born last June.

Pensioners hail el-Rufai over rise of pension to N30,000

Alohka laid down her life for children she loved, says Buhari