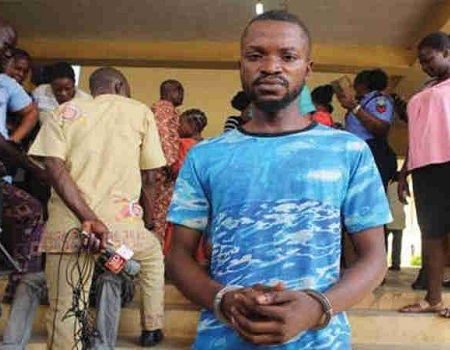 AN Ondo state High Court sitting in Akure, on Wednesday sentenced the 27-year-old, Sehidu Adeyemi, the boyfriend of the daughter of former deputy governor of the State, Khadijat Oluboyo, to death by hanging.

The Presiding Judge, Justice Samuel Bola, while delivering the judgement said the prosecution counsel had been able to proved and established beyond reasonable doubt that the defendant was responsible for the death of Khadijat

According to the judge, though the defendant pleaded not guilty to the offence, but said there was enough circumstantial evidence before the court to nail the accused as the perpetrator of the crime.

He said the convict could not give satisfactory evidence to absolve himself from the death of the deceased, saying all evidence proved that the young lady was not killed by two unknown men but was killed by the defendant.

“The act was intentional as the young lady was strangulated, with the hair on her head and pubic region shaved, while her two upper front teeth broken.”

ALSO READ: #FactCheck: Has INEC issued Certificate of Return to Ademola Adeleke as Osun governor-elect? Tribune has an answer

He said according to the psychologist report, “there was an abnormal shaving of the hair on the deceased head and the pubic region while her two upper front teeth had been broken off leaving only some fragments left.

“There were fractures on the bones of her neck, shoulder along with her second to the sixth ribs on both sides, a dislocation of her hip joints with another fracture on the upper part of her thigh.

“The injuries could not have been self-inflicted but given by another party, and inflicted with a significant pressure especially the upper thigh region which had a lot of muscles.

“There were lacerations on her chest which damaged two major vessels known as the femoral artery and vein that circulate blood in the body. The combined effects of the injuries led to Khadijat’s death..”

Justice Bola said the alibi of the accused over the threat by the two men which he claimed to be unknown to him was not tenable before the court, saying the accused failed to raise alarm when the men asked him to bring jigger and shovel used in digging the burial ground in his room

He said the accused, buried the deceased, plastered the grave and exhume the remains after the sixth day, with an intention to dispose the decomposing body.

He noted that facts from the eight prosecution witnesses established the fact that the young lady was killed by Adeyemi.

The Judge, however, said “having found you guilty, the sentence of this court upon you is that you, Sehidu Adeyemi, will be hanged until you are dead. May God have mercy on your soul.”

The decomposing remains of Khadijat were found in a grave in Adeyemi’s room in Akure, after missing for six days in what was suspected to a money ritual by the boyfriend Adeyemi.

Adeyemi, a graduate of Quantity Survey at the Federal University of Technology, Akure (FUTA) who admitted being into Yahoo business, said he had been dating the deceased for some four years, 2011 to 2015, before they went their separate ways but staged a comeback in 2018, while the lady was brutally murdered a week after.