Kidnappers release Catholic priest, say ‘you are not our target’ 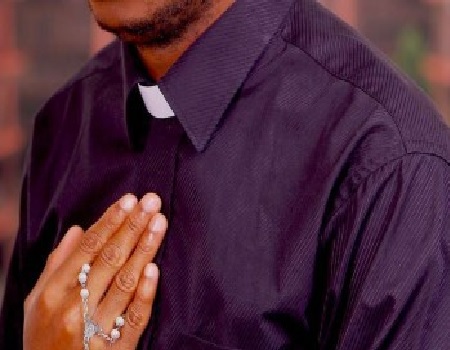 The Otukpo Catholic Diocese priest, Rev. Fr. David Echioda, who was kidnapped last Sunday has been released by his abductors.

Disclosing this to newsmen on Wednesday, the director of communications, Otukpo Catholic Diocese, Rev. Fr. John Okopotu, said that the kidnappers apologised to the priest as he was not their target.

Rev Okopopu said that the victim (Rev. Fr. Echioda) was released on Tuesday around 6:30 pm

The Rev. Fr. said that the abductors told the victim that he was wrongly abducted and that they were expecting a top politician who they had information would be passing the route around 2:00 pm on Sunday but they waited until around 4:00 pm and did not see their target.

The director of communication said that the priest who was returning to Otukpo only ran into the gunmen numbering six who were armed with sophisticated weapons.

Rev. Fr. Okopotu said: “Yes, the priest was released yesterday (Wednesday) after the gunmen tortured him.

“The abductors said that he was not their target and that they had information that a top person was going to pass the road around 2 pm.

“Unfortunately, when the gunmen could not see their target, they began to rob and the priest was the first to run into them and they dispossessed him of his belongings including the church’s money.

“They forced him into his vehicle – three men in the front, three at the back while one was searching the priest. All of them carried AK-47 and were speaking Hausa.

“Although the priest understands Hausa and communicated with them in Hausa, they tortured and later released him with an apology that he was not their target.