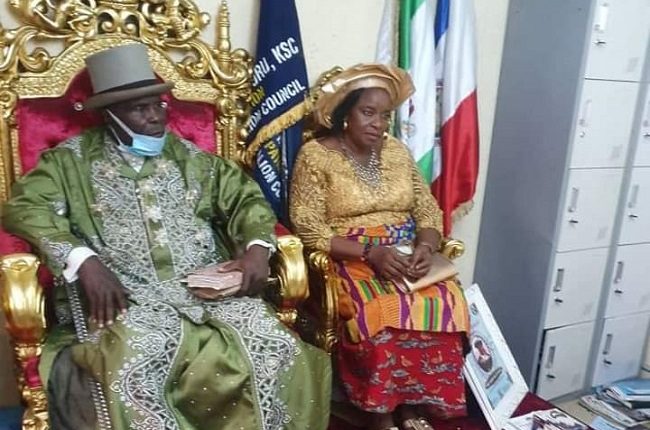 The King of Ikuru Town in Andoni Local Government of Rivers State His Royal Majesty, HRM Dr Aaron Miller, the Okama of Ikuru who was kidnapped on February 21, 2021, was released Saturday night, the Rivers Police Command has reported.

Reports have it that he was released in Abissa forest, Akuku Toru LGA of the state as police claimed that no ransom was paid and that the traditional ruler has finally reunited with his family.

A release by Nnamdi Omoni, Public Relations Officer of the command has it that the traditional ruler was released Saturday night at a forest in Abissa, Akuku Toru LGA, where he had been held in captivity for over one month now.

He added that his release was as a result of a robust synergy between the Police and the Navy, where through collaborative efforts, both agencies from inception, worked relentlessly and with the aid of technical assistance, among other measures led to his release.

“Recall that the traditional ruler was abducted on 21/2/2021 from his home town Ikuru and taken to an unknown destination. However, the Police in the wake of the incident deployed strategically and mounted unassailable pressure on the Kidnappers. In one of such pressures, the King’s clothes and Hat were recovered at a creek, while one Wariboko Basoene was arrested. In the course of the investigation, the suspect who made useful confessions to the Police finally led the Operatives to a forest in Abissa, where the traditional ruler was eventually rescued, unhurt,” Omoni said in the statement.

“Narrating his ordeal in the hands of his abductors, the Royal father who was in an expansive mood, candidly expressed gratitude to God Almighty for his release, using the instrumentality of the Police and others who contributed directly or indirectly to his release.

Earlier the Commissioner of Police, CP Eboka Friday, who led his Officers to the residence of the traditional ruler, equally thanked God for the release and commended his men for the feat,” the police added.

The statement noted that on the assumption of duty, the Commissioner was confronted with the dastardly incident but however put in place adequate machinery to ensure the safe and unconditional release of the King and his kinsman, (the Lecturer) kidnapped the same day as the royal father.

Omoni explained that the monarch was released only three days after the Rivers State Council of Traditional Rulers, summoned the CP to their Secretariat and charged him to redouble efforts and ensure that their colleague was released in record time

“The Rivers State Police Command wishes to reiterate its commitment to ensuring that the state is safe and secure with the strong pledge to tackle all manner of criminal elements headlong while soliciting for the full cooperation and support of all and sundry in information sharing, as a panacea for crime-fighting,” Omoni added.

In the penultimate week, (March 7 – 13), there were 2,300 cases, a reduction when compared to the 2,817 recorded in the previous week’s (February 28 – March 6)…Kidnapped Rivers’ royal father regains freedom one month after