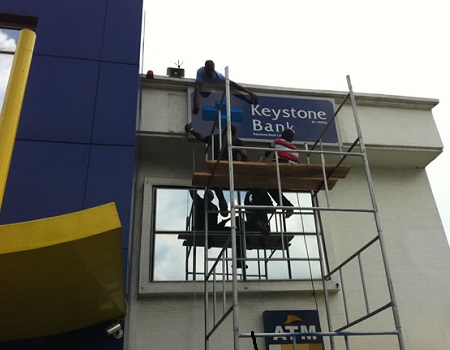 AMCON, in a statement dated Monday, said the announcement was in relation to the acquisition of the entire issued and fully paid up ordinary shares of the bank. But this announcement came amid controversies surrounding the sale of the bank, with AMCON alleged to be acting in breach of extant takeover provisions.

This, AMCON said, follows the receipt of the necessary regulatory approvals from the Central Bank of Nigeria (CBN) and the Securities and Exchange Commission (SEC).

The completion of the transaction is subject to the fulfilment of the conditions precedent as stated in the Share Sale and Purchase Agreement executed between AMCON and the consortium, the corporation added.

Earlier in November 2016, some senior officials of AMCON had voiced strong opposition to the planned sale of Keystone Bank Ltd.

The disturbed officials specifically alleged that Ahmed Kuru, the chairman of AMCON, had concluded plans to hand over Keystone to a coalition of powerful Northern interests, while disregarding extant takeover provisions of AMCON in the process.

After a commercial was placed for the bidding process by AMCON, 13 companies had submitted their expression of interests but the companies did not include the firm which AMCON was set to sell the bank to.

Available records, however, revealed that AMCON was reportedly in talks to sell the bank for about N2.1 billion, representing only a fraction of the approximately N100 billion that AMCON paid to purchase the bank’s bad debts in 2011.

The corporation said the process leading to the acquisition started with interest shown by 18 parties cutting across local and international investors. “The emergence of the Sigma Golf-Riverbank consortium resulted from a rigorous and competitive bidding process, which was coordinated for AMCON by Citibank Nigeria Limited, its affiliates and FBN Capital (Joint Financial Advisers) as well as Banwo & Ighodalo and Crosswrock Law (Joint Legal Advisers).

Also, in November 2014, Skye Bank emerged the preferred bidder for the acquisition of Mainstreet Bank, bidding N126 billion for the entire issued and fully paid capital for the nationalised bank.

Dentist urges Nigerians to clean their mouths after meals