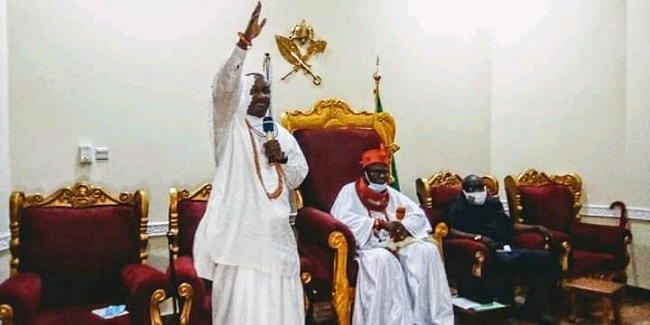 The Minister of State for Labour and Employment, Festus Keyamo, has urged youths in his constituency to take advantage of the Federal Government’s soft loans and social investment schemes to stem unemployment in the country.

Chief Keyamo gave the admonition during his visit to the palace of the Ovie of Uvwie Kingdom at Effurun GRA, Uvwie Local Government Area of Delta State.

The minister, who hails from Uvwie kingdom, disclosed that his visit was at the directive of President Muhammadu Buhari that all members of his cabinet should visit their domains to pacify and preach peace and unity among Nigerians.

Chief Keyamo said President Buhari commended the people of Uvwie, especially the youth for the maturity displayed during the #EndSARS protest by not destroying critical assets of governments.

He advised unemployed youths of Uvwie kingdom to take advantage of social investment schemes, the Federal Government’s 1,000 jobs for each state to better their lots.

He added that the Federal Government had established the Nigerian Youths Investment Funds with N75 billion for a period of three years as economic empowerment intervention initiatives and many other soft loans programmes to reduce youth restiveness.

The Uvwie monarch, who thanked Keyamo for attracting development to Uvwie kingdom, noted that ignoring the voices of traditional rulers on problems confronting the nation by the Federal Government should end, saying they are the grassroots leaders and fathers.

He further noted that the #EndSARS protesters were right in their agitations, just as he praised Uvwie youths for protecting lives and property in Uvwie Local Government Area during the protest.

He, however, advised the Federal Government to ensure that the 1,000 jobs for each local government area of the country should be shared equitably without political sentiments.

The traditional ruler disclosed that of the 1,000 jobs slots apportioned to Uvwie LGA, 30 slots were shared among the various quarters in the Uvwie Kingdom.

The monarchs, who lamented the rate of unemployment among graduate youths, appealed to the FG to look into the creation of Uvwie Police Area Command, return of Uvwie land illegally occupied by the Nigeria Army, reopening of Osubi Airstrip, reconstruction of Effurun-Sapele-Benin highway and the conversion of casual and support staff of NNPC to full staff.