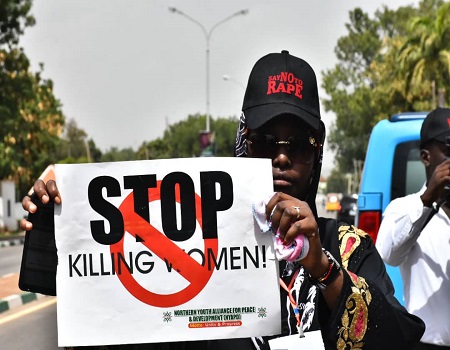 Bauchi State citizens have been tasked to as a matter of necessity key into the fight against the ugly act of violence against women particularly issue of rape to ensure it is totally defeated for the betterment of the society.

The call was made by Bauchi State Governor, Sen Bala Mohammed Abdulkadir while speaking on Monday when he granted audience to members of the Northern Youth Alliance for Peace and Development on an advocacy visit at the Government House saying that the government will promote anything that will protect the dignity of the woman.

Bala Mohammed who was represented by the Chief of Staff, Government House, Dr Ladan Salihu further assured of the readiness of his administration to continue to initiate policies geared towards ensuring the total eradication of violence especially rape against women and girl child in the state.

He said that ” I want to sincerely welcome you to Government House Bauchi and in doing so to appreciate you for the sense of commitment and sacrifice as well as your advocacy to be in the forefront of awareness and the need for all of us to know the dangers associated with the practice of rape”.

The Governor further said that ” Rape has no gender or colour and should therefore not be accepted, it is not only for your organisation, but it is also for all to join hands in the protection of the rights of women especially girls child.”

ALSO READ: We are determined to make all routes accessible in Ogbomoso ― Hon Ajagbe

Bala Mohammed applauded the organisation for embarking on such campaign promising government’s support in that direction as the world celebrated the 2020 edition of International Day on Violence Against Women with the focus of raising voice against rape.

Bala Abdulkadir Mohammed then pledged that his administration is ready to work with critical stakeholders by keying into the campaign against all forms of violence against women in the society.

Speaking earlier, leader of the delegation, Babayo Liman explained that the group has keyed into the campaign against rape in order to complement the efforts of the United Nations, Federal Government and the Bauchi state government in tackling the menace.

According to him, the group embarked on the rally in Bauchi to say, ‘No to Rape’ and to support the laudable initiatives of critical stakeholders working against sexual violence and harassment, forced sexual acts, unwanted sexual advance, child sexual abuse, forced marriage, human trafficking among others.

Babayo Liman further said that ” Your Excellency, we are here to tell the entire world that we are against the issue of rape, we want the Bauchi state government to do everything possible to stop the ugly act in the state. ”

He, therefore, noted with satisfaction, that with the coming of the administration of Governor Bala Abdulkadir Mohammed, the issue of rape has drastically reduced in the state.