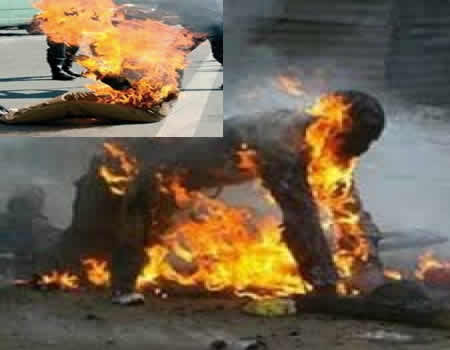 Tragedy struck in Enugu on Thursday when a pregnant mother and her 4 year old son were burnt to death while others sustained various degrees of injuries in a kerosine explosion.

It was gathered that the inferno which occurred at Ngenevu, an Enugu suburb, threw residents of Enugu metropolis into panic as the kerosine was feared to be an adulterated one.

Although the State Police Public Relations Officer, Ebere Amarizu, said he was yet to ascertain the cause of the kerosine explosion, he said, “It was gathered that on that fateful day, one Hillary Ugwuoke also from Ngenevu had bought kerosene from a neighbour in the evening which he later poured into his lantern and in the attempt to lit the lantern, the kerosene exploded and went into flames and on the process this pregnant wife and his children were burnt by the inferno”

Amarizu further said, “And sympathizers assisted in their being taken to National Orthopedic Hospital, Enugu for medical treatment. At the hospital, Mrs. Ugwuoke who is said to be pregnant was confirmed dead together with her 4 year old son while others who sustained severe burnt are receiving treatment”

“Investigation into the incident has begun by police operatives with a view to finding out the likely cause of the incident”, the Police Spokesman added.