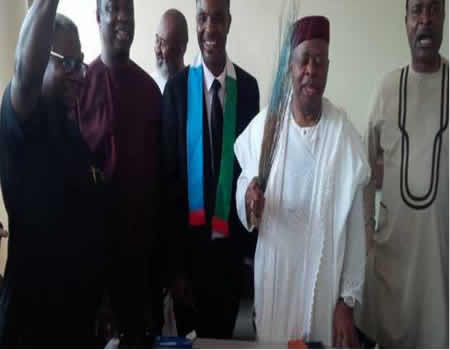 FORMER Senate President, Ken Nnamani and ex-Governor of old Anambra State, Senator Jim Nwobodo, have described their entry into the All Progressives Congress (APC) as a good omen for Ndigbo just as they pronounced the Peoples Democratic Party (PDP) literarily dead.

Both Nnamani and Nwobodo who spoke in their respective Enugu residence while re-registering in APC  on Sunday, urged Ndigbo to join the APC with a view to reintegrating into the nation’s body polity ahead of 2019 general elections.

Chief Nnamani who was first to re-register in APC revealed that he had searched his inner mind since he went on sabbatical leave from active politics, and had come to conclusion that APC is a platform where he can contribute meaningfully to democratic process in the country.

“I left PDP last year February. When song changes its rhythm and lyrics, you have to change your dancing steps. If you want to make constructive criticism, you have to be inside. I am in APC in the day and night. If you have skeleton or tribunal hanging on your neck, do not come to APC and sit on the front row. You can be a member of APC but not to be at the front line. A party is strong when it has large membership. PDP said it is democratic but it does not practice democracy.”

According to Chief Nnamani, “All Politics is local. Registration is a process for formal declaration. It is a private exercise hence it is done in my residence. I am a going to formally declare publicly and that is when I will fully speak on why I left PDP.  It is a thing of joy as I joined those who have been keep the flag flying in APC”

For Chief Nwobodo, “it is high time Ndigbo joined APC because you cannot fight from outside. You cannot talk of APC without Igbo. Nigeria is on tripod. Unless injustice done against Ndigbo is redressed, there will be no peace in Nigeria. My friends from the West who are progressives are all in APC and if I meet them I will tell them I was a progressive before them”

Recalling his trials under the then military government, Nwobodo said that the amount of money allegedly embezzled these days baffle him, adding his case was just N2miilion he spent to nurture his then political party.

“One thing about President Muhammed Buhari is that he has zero tolerance to corruption. No Public Officer steals money these days with impunity. There is no case of kidnapping in the East these days. I once told Buhari that Nigerians need him. My wife in 2011 voted for Buhari even while I was in PDP”

Chief Nwobodo advised APC members to be their brothers’ keeper. “Stop quarreling. Stop bickering. I know my people and I know what to tell them and the need to join APC. My experience after being one of the founding fathers of PDP is terrible. We were all chased out from PDP. I belonged to a political party that saw my bank dead”

Earlier, both Director-General of the Voice of Nigeria (VON), Osita Okechukwu and the National Vice Chairman, Southeast Zone, Emma Eneukwu had their different speeches expressed happiness over the entry of the two politicians into the APC fold, describing them as “Generals”.