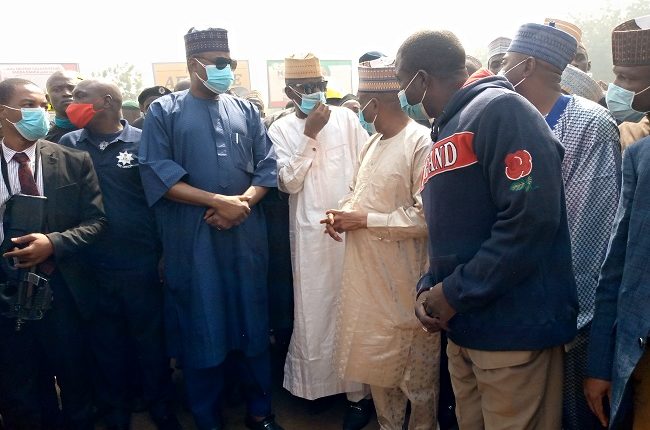 Kebbi State Governor, Sen. Abubakar Atiku Bagudu has donated the sum of N30 million to the victims of the Tuesday morning fire that gutted Sokoto Central Market in Sokoto.

Gov. Bagudu was the first high-profile personality to pay a sympathy visit to his Sokoto State counterpart, Aminu Tambuwal over the incident.

He said his visit to Gov Tambuwal was to commiserate with the government and people of the state, stressing that whatever happens to the state concerns him.

According to a statement signed by the special adviser on media and publicity to the governor, Muhammad Bello, Tambuwal said the donation is a testimony of the cordial relationship and brotherhood between Sokoto and Kebbi States.

Disclosing that, so far, no life has been lost as a result of the fire, Tambuwal said fire fighting vehicles belonging to both the state and the federal government as well as the Sultan Abubakar III International Airport, Sokoto were at the scene of the fire to control the situation.

Meanwhile, Governor Tambuwal has set up a committee to take the stock of properties and other valuables lost due to the fire incident at the market.

Tambuwal said the committee headed by the state deputy governor, Manir Dan’iya, is to report to the government after its assignment.

He urged members of the committee to itemize losses suffered by traders so as to make way for the government to come in to assist in order to cushion the effects of losses.

He described the incident as a sad development while appealing to all the traders to remain calm and prayerful.

He appealed to them not to give the opportunity to hoodlums to enter into the market and help themselves with people’s good.

Other members of the committee include Chairman State House of Assembly Committee on Commerce, Commissioner for Lands, Commissioner Commerce, representative of Sultanate council, DG Central Market as well as DG Fire service.

A large section of the market was consumed in an early morning fire. Goods worth billions of naira were burnt while some lucky traders were able to salvage their wares.