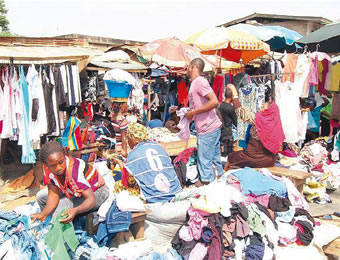 Katan Gowa Market is a second-hand clothing hub, whose clientele base has continued to grow in  the South West and beyond. Situated on Abule Egba-Iyana -Ipaja Axis in Agbado Oke Odo Local Council Development Area of Lagos State, Katan Gowa is a market that boasts very rich history and tradition, AKIN ADEWAKUN reports.

Its name may sound alien to the community it is domiciled, but it is obvious from its operations that it is meant to cater for the needs of all, irrespective of where they come from. There is always something for everybody, as far as the market is concerned. This perhaps explains the increasing patronage the second-hand clothing market has continued to enjoy across the South West and beyond, in recent times.

While some believe that this market, which prides itself as one of the biggest second-hand clothing commercial centres in south-western Nigeria, derived its name from the early Northern traders in the place, others simply ascribed the nomenclature to the huge concentration of Nigerians of Northern extraction, not necessarily merchants, living in some areas within the neighbourhood.

Despite the not-too-clear history of the Katan Gowa nomenclature, it has, today, become a generic name for second-hand materials, especially clothing.

The history of  Katan Gowa Market may be shrouded in mystery but one thing that is glaring about this variant of the famous Okrika Market in the Orile area of Lagos is the cost accessibility of most  wares sold in the market; a strong reason the market has continued to thrive, especially at these trying economic times.

“Although one may not be able to trace the history of this market or verify where it derived its name from, one thing that is sure is that the location of the market and the cost accessibility of its wares have really given it that a competitive edge,” explained Bolaji, a  factory worker in a cream factory in Abule Egba and  a frequent visitor to the market.

Bolaji may not be farther from the truth.  For instance, Saturday Tribune gathered that the proximity of the market to the neighbouring Benin Republic, a country that has become a mecca of sort for Nigerians trading in second-hand goods, is one of the factors that have kept this popular market going for the past few decades. The relatively cheap wares in the market have made it irresistible for Lagosians and others who come from neighbouring states and villages.

“I go there on a quarterly basis to pick things for the family, especially at the beginning of every academic term,” stated Alaba Johnson, a staff in a federal government establishment in Ado Ekiti, Ekiti State.

According to Mrs. Johnson, besides its cost effectiveness, the durability of materials of items bought from the market will always be a major attraction for her.

While Mrs Johnson buys from the market in retail, Mrs Wemimo Olaniyan buys wares wholesale. Since retiring from the Ondo State civil service three years ago, the mother of three has gone into second-hand clothing mercantilism with Katan Gowa Market constituting her major supplier.

For this class of people,  Katan Gowa Market remains that ‘place of   refuge,’ especially at these times when the price of virtually every commodity has continued to aim for the roof.

But while the market has continued to hold its attraction for this category of people, especially those on the lower scale of the socio-economic ladder, there are many who would not dare touch it with the longest of poles. A case of different strokes for different folks, one may say.

For instance, for some, Katan Gowa Market still represents that ‘old, second-hand clothing market, another sad replica of the famous Okrika Market’ that should be steered clear of.

“For me, the market and every other second-hand market in the country represent a sad reminder of our failure as a country. They are pointers to the real reasons why those textile industries of  old such as Odua’tex, Asabatex and others are no longer in place,” Mr Ibrahim Kolapo, an economist,  said while commenting on the proliferation of second-hand ware markets in the country and their increasing patronage by Nigerians.

Kolapo argued that with the existence of such markets,  the present government’s efforts at reviving the nation’s economy might end up an exercise in futility .

“There is no way their existence is helping the nation’s economy. All those things that you see as gains are just superficial. We can make real profits if we learn how to do these things here and get them patronised,” he added.

Kolapo’s comments may be a bitter pill for those eking out a living in this market, and not a few of them believe that such a wish could come to pass in the foreseeable future.

But they might be right since they seem to enjoy the support of history. The immediate past governor of the state, Mr Babatunde Fashola, had once planned a relocation of the market to another part of the city, a move traders in the market then frowned at and resisted.

Interestingly, years after, the traders have been able to weather the ‘storm’ of the planned relocation. Today, the market still stands tall in its original location.

Perhaps one striking thing about Katan Gowa is the fact that even though with a nomenclature that seems to suggest that it is meant for people from a certain part of the country, it is actually a market that flings its arms open to all, as obvious in the variety of wares displayed at every nook and cranny of the market.

A first-timer to the place might get the shock of his life at the type of wares, especially ladies’, on the display shelves in the market.

At the ladies section, ladies’ under-wears, ranging from pants to brassieres and other accessories are on display and patrons are never in short supply.

Ladies of different hues and classes were seen picking their choices enthusiastically and  paying for them.

‘It is a sign of the time. Ladies that used to snub that section before are suddenly finding solace in those wears. Nobody seems to be thinking of the health implications of wearing such clothing items again. It is that bad,”  another patron of the market stated.

But some of the ladies who reluctantly volunteered to speak with Saturday Tribune stated that the issue of health implications would not arise as long as the materials were properly sterilised before use.

“I used to have such funny feeling about patronising this section before but the fact remains that what you get here as second-hand are far more durable than the so-called new wares sold in some markets,” Madam Titilola, who buys in retail, told Saturday Tribune.

She added that since no authority queries the existence of these wares, less blame should go to those that patronise them.

The authorities seem to have their reasons for looking the other way as far as the existence of this second-hand market is concerned. It has become a huge source of Internally Generated Revenue for them, of late.

Perhaps the economic role Katan Gowa plays in the lives of citizens and authorities in the area is best captured by Fatima Ibrahim, a pure water seller in the area.

For Mrs Ibrahim, besides being a refuge for Lagosians desirous of quality and affordable clothing materials at this period, the market has enhanced the economies of individuals and corporate bodies in the area.

“If not for this market, surviving at these trying times would have been tough for me and my entire household. With the existence of the market in the area, I don’t need to go far to earn a living,” she stated.

Perhaps this explains the gloom that attended the botched relocation by the immediate past regime and the reason the market will remain relevant to Lagosians and people in neighbouring states.

The problem with dialogue!