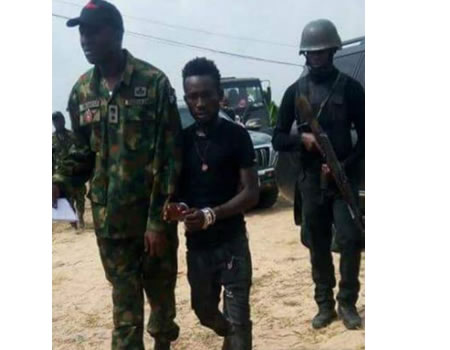 Few hours after the alleged arrest of the wanted kidnapper, Peregbakumo Oyawerikumo, also known as ‘Karowei’ and his gang, the Joint Task Force (JTF) code-named Operation Delta Safe ((OPDS) has announced the death of the suspects.

Nigerian Tribune had reported late Thursday the alleged arrest of the alleged lethal kidnapper of four British Christian missionaries and killer of a military captain during an operation carried out by troops of OPDS.

But a contrary report pieced on Friday from a source alleged that the operatives of JTF actually killed Karowei in spite of willingly ‘surrendering’ to them on Thursday.

Karowei, it was gathered, was killed Thursday night in controversial circumstances after his claimed surrender and arrest at Ogbobagbene community in Burutu Local Government Area of Delta State.

Coordinator, Joint Media Campaign Centre, Major IBRAHIM ABDULLAHI, in a statement signed and made available electronically to journalists at the wee hours of Friday, gave details of how Karowei and his gang met their Waterloo after their ‘arrest.’

He disclosed that “after his arrest, Karowei confessed to several criminal acts and led troops to his camp to recover the cache of arms and ammunition in his possession as well as to persuade other members of his gang to surrender.

“However in a twist of events,” Abdulahi added that “Karowei’s recalcitrant group laid an ambush and attacked Task Force troops in a gun battle at his camp deep in the forest.

“This was in a bid to rescue Karowei from own troops. The superior firepower, resilience and gallantry of own troops countered this snap attack which resulted in the death of several of Karowei’s henchmen and the kingpin, Karowei who tried to flee to rejoin his cohorts.”

Abdulahi said the successful operation was the fruits of a seven-day clearance operation initiated by the Commander of JTF, Rear Admiral Apochi Suleiman, to sanitise the Niger Delta of militants, cultists, sea robbers, kidnappers and other criminals.

“This operation was aimed at tackling the security challenges posed to the safety of lives and critical oil and gas facilities in the region.

“Consequently, a 7-day clearance operation was initiated by the Comd JTF Rear Admiral Apochi Suleiman to sanitise the region of militants, cultists, sea robbers, kidnappers and other criminals.

“During the operation, precisely on Thursday 11 January 2018, a notorious militant leader Peregbakumo Oyawerikumo also known as ‘Karowei’ and his criminal gang were arrested,” Major ABDULLAHI noted.

Meanwhile, the JTF Commander, Rear Admiral Suleiman, has expressed deep appreciation for the support of the locals within communities in Burutu and Ekeremor local government areas of Delta and Bayelsa states in the final uprooting of Karowei and his gang who have, for long, constituted serious security menace to the region.

Abdulahi said Rear Admiral urged folks living in the area to go about their legitimate businesses as the waterways are now safe and secure, just he assured the local communities of the JTF’s poise stamp out criminalities in the Niger Delta in line with the mandate of the Chief of Defence Staff.

It will be recalled that Karowei and his gang abducted four British missionaries on October 23, 2017, in Burutu Local Government Area of Delta State which led to the eventual death of one of the Britons, Mr Ian Squire.

Karowei and his gang, it will be recalled also, were also allegedly responsible for several other kidnappings, robberies and raping of innocent women in the region including unprovoked attacks on military locations in Delta and Bayelsa states.

Karowei and his gang, it was gathered, were also responsible for the attack on OPDS troops at Bolu Ndoro forest which led to the death of four military OPDS personnel on January 7, 2018.