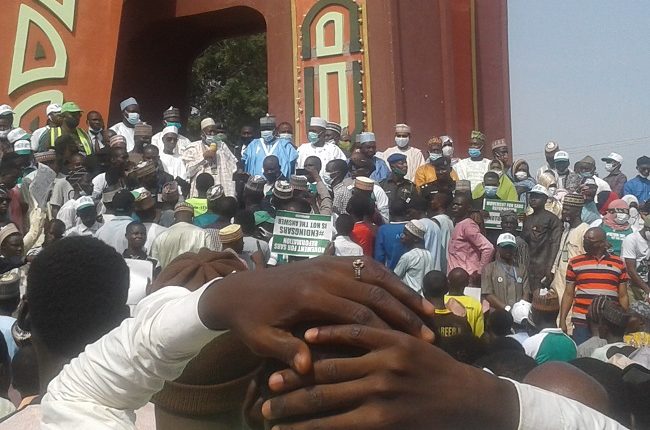 Hundreds of youths staged a peaceful protest in the ancient city of Kano to express their appreciation and support for the creation of Special Weapon Tactic (SWAT) in replacing the disbanded Special Anti -Robbery Squad (SARS) on Wednesday.

This was just as state governor Abdullahi Umar Ganduje, commended them for expressing their views in a peaceful manner and not in outright condemnation of entire Nigeria Police, because according to him, it was well known that not all Policemen are bad.

However, the leader of Coalition of Kano Youths, Mallam Khali Sanusi, said they resolved to come out on the streets, to lend their support for the creation of a new outfit tagged SWAT because they believe it was in the right direction.

Amongst the placards carried by the youths reads “We support the reformation of SARS, We support SWAT, thanks to IGP, End ASUU strike now” as well as others.

Sanusi disclosed that as they support the creation of SWAT, they called on the IGP to ensure proper training and funds needed for the take-off of the unit.

He then called on the National assembly to lend its support for reform legislation to the security problems bedevilling the country.

We believe the IGP will re-evaluate, reinforce, re-build an efficient SWAT that will address the security situation of the country.

However, while responding, the state governor Abdullahi Umar Ganduje said: “You are welcome to this important gathering, I have congratulated the Coalition of the Youths in the state for not taking laws into their hands by causing havoc and crisis during the protest.”

His words: “Without peace, no development could be achieved, security operative was paramount in ensuring that peace reign in the state and in the country, adding that though it was believed that there were bad eggs among them as it was also possible of having bad eggs in all profession.”

We were happy that after analysis of all demonstrations held in some part of the country, Kano youths decided to express their stand of not condemning the Police but berating the bad eggs within then system, which is in a right direction.

Ganduje, however, disclosed  “this resolution is the right type of revolution because if we all condemn the entire Police system, the question we should ask ourselves is, can we exist without security operative, especially the police? I think the right answer must be no.

We then thank Mr President, for taking a prompt step in disbanding the SARS and as well commend the IGP for coming up with a new outfit to replace the disbanded SARS.