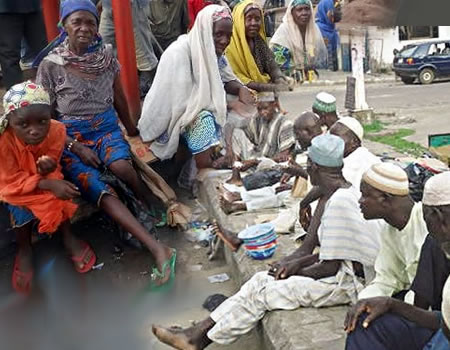 Some Kano residents have commended Gov Abdullahi Ganduje of Kano State for banning street begging in the state.

Some of the residents told the News Agency of Nigeria (NAN) in Kano that the directive would add more value to the administration.

One of the residents, Malam Abubakar Wada, lauded the governor for the decision to prosecute parents whose children were found begging on the streets instead of sending them to school.

“The number of children roaming the streets of Kano during school days showed that parents somewhere have failed in carrying out their responsibilities.

“No child was brought to this world to take care of itself and its responsibilities, so why should people bear them when they aren’t ready for them?”

He explained that the word means a scholar who leaves his comfort zone in search of knowledge but not a beggar as believed.

He revealed that begging in the name of searching for Islamic knowledge was not ordained in Islam, but a rather cultural thing.

A housewife, Malama Umaira Ibrahim, also commended the governor for the decision, saying that most mothers were forcefully separated from their children, who were sent out to learn the Qur’an but ended up begging to survive.

NAN reports that Gov. Ganduje has declared a total ban on street begging and threatened to prosecute parents of children found on the streets.

The governor announced the ban on Tuesday at the launch of Basic Education Service Delivery for All (BESDA) and distribution of 7, 500 appointment letters to volunteers for the pilot scheme.