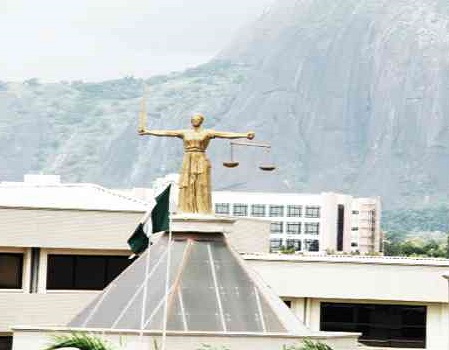 Share
The Supreme Court on Tuesday fixed Monday, January 20, 2020 to deliver judgment in the appeal seeking to sack Abdullahi Ganduje as Governor of Kano State.
A seven-member panel of Justices of the apex court presided over by the Chief Justice of Nigeria (CJN) Justice Ibrahim Tank to Muhammad, fixed the date after taking submissions of counsel in the appeal.
The governorship candidate of the Peoples Democratic Party (PDP), Abbah Yusuf had approached the apex court to set aside the decision of the Court of Appeal which affirmed Ganduje as the lawfully elected Governor of Kano State.
The Court of Appeal had in a judgment delivered on November 22 last year upheld the judgment of the Kano State Governorship Election Petition Tribunal which affirmed Ganduje’s victory in the March 9, 2019 governorship elected conducted by the Independent National Electoral Commission (INEC’s) in Kano State.
In arguing the appeal, Yusuf’s counsel, Chief Adegboyega Awomolo(SAN) urged the court to nullify the election of Ganduje on the grounds that his victory was based on a purported illegal bye-election conducted in 207 polling units.
Awomolo had argued that the State Returning Officer who had conducted the bye-election in the affected polling units lacked the legal powers to do so.

ALSO READ: Driver allegedly absconds with employer’s jeep after dropping him off for check-up

He added that the State Returning Officer, after declaring the entire results of the election in the 44 local government areas of Kano State was wrong to have gone ahead to cancel the election in 207 polling units and conducting a bye-election thereafter.
Awomolo, therefore, urged the court to nullify the purported bye-election conducted on March 23 in the 207 polling units and declare his client winner based on the results declared by the State Returning Officer on March 11, 2019.
However, the respondents in their various submissions urged the court to dismiss the appeal on grounds that the State Returning Officer did not cancel the election of 207 polling units as claimed by the appellants.
Counsel to INEC, Ahmed Raji (SAN) in his submissions told the apex court that the appellants, both at the tribunal and Court of Appeal failed to prove that votes were cancelled in 207 wards
According to Raji, records only showed the inability of the State Returning Officer to collate results of the affected polling units which was occasioned by the action of the appellants own witness, who, in his evidence admitted carting away ballot boxes of Galma wards belonging to the 207 polling units.
Both counsels to the All Progressive Congress (APC) and Ganduje aligned themselves with Raji and urged the court to dismiss the appeal for lacking in merit.
The CJN, after listening to submissions of all counsel in the matter announced that judgment in the appeal will be delivered on January 20, 2020.
Other members of the panel include; Justice  Nwali Sylvester Ngwuta, Justice Olukayode Ariwoola, Justice Kudirat  Kekere- Ekun, Justice Aminu Sanusi, Justice Amina Augie and
Justice Uwani Musa Aba Aji.
Abdullahi GandujeAll Progressive Congress (APC)Chief Justice of Nigeria (CJN)Independent National Electoral Commission (INEC's)Kano statePeoples Democratic Party (PDP)Supreme Court
Share FacebookTwitterGoogle+ReddItWhatsAppPinterestEmail