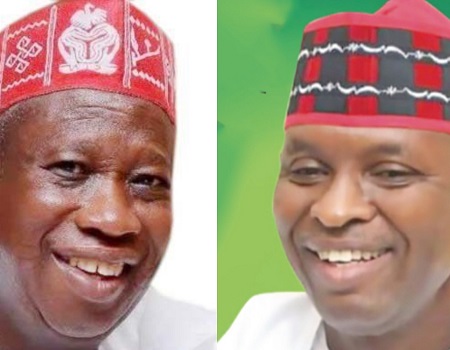 It would be recalled that the PDP had accused the ruling All Progressives Congress (APC) and Governor Abdullahi Ganduje of plotting to change the judges that have already been assigned to preside over the Kano State Governorship Election Appeal Panel.

However,  in a statement signed by the commissioner of information, Malam Muhammad Garba, on Monday, stated that even if happened, it is the discretion of the court to decide who presides over its proceedings, saying, however, the fundamental issue is for justice to prevail.

According to him, the said allegation made against the APC, its candidate, Governor Abdullahi Umar Ganduje and also to blackmail the Appeal Court by the PDP, clearly indicated that the opposition party is jittery, confused and afraid of possible loss at the Court.

Garba noted that it had always been the trademark of the PDP to spread falsehood in the face of imminent loss of court cases as they did in Kano State during the legal battle at the Governorship Election Petition Tribunal and the Presidential election case.

According to him, it is unfortunate that the opposition party who resorted to legal means to redress its grievances could be careless to the extent of making an unfounded allegation against the judicial process.

However, the commissioner added that while it is not a crime for the APC members to have confidence in the outcome of the Appeal Court judgment, the party and its candidate have no intention whatsoever to disrupt the judicial process.

Garba said that Kano has been peaceful and there is no indication of any tension as alleged by the PDP, saying that government will not condone any act that is capable of inciting violence through reckless, unguided and indiscriminate statements that are inimical to the peace that APC has allowed the opposition to enjoy in our dear state for more than five years.

However, in a statement on Sunday, signed by its National Publicity Secretary, Kola Ologbondiyan, the PDP alleged that there are “plots to replace the judges with pliable ones, who have been compromised and briefed to alter justice and do the bidding of the APC and Governor Ganduje.”

The opposition party also claimed that even before the commencement of the appeal hearing, supporters of Ganduje have already started celebrating the victory.

It would also be recalled that the PDP and its candidate in Kano, Abba Yusuf have filed an appeal at the Kaduna Division of the Appeal Court after their petition challenging the victory of Ganduje was dismissed by the Kano Election Tribunal led by Justice Halima Shamaki.