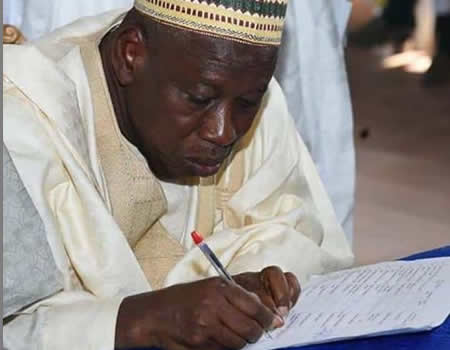 The Kano State Government in its effort to ensure street begging were off the roads in the state, had arrested and repatriated over 1,500 Almajiris back to their states and countries of origin, following recent banning of street begging in the state.

This was just as the organisation said Katsina has the highest numbers of the repatriated almajiris while Jigawa State has the least.

Disclosing this while speaking with pressmen, the image-maker of the Hisbah, (the state’s moral police) Lawan Fagge, said on Friday that those arrested were repatriated to their states which includes: Katsina, Zamfara, Kebbi, Borno and Yobe States.

According to him, among the arrested almajiris, about 70 percent are children from the ages of seven and twelve

He further disclosed that are from Kano, Adamawa and neighboring countries of Chad and Niger Republic, noting that following the ban, some parents voluntarily withdrew their children from the streets.

He, however, revealed that there are also old aged women who see begging as a business, as even when their families provided all their needed necessities, they insisted on going out to beg.

According to the official, those in that category are over 400. We counseled them and handed them over to their families here in Kano, while others are repatriated back to their states, the official said.

His words “Those arrested children from Kano were classified. Those who can read and write the Holy Qur’an were identified awaiting further directives from his excellency the governor.”

He then acknowledged that the banning of the streets begging in the state is still facing a challenge because they are still currently debating other almajiri’s teachers who are against the ban.

Fagge noted that the government’s decision to ban the children from street begging is meant to safeguard their future and make the society a better place for all, the spokesperson said.

According to him, the government said the effort was to fully consolidate the free and compulsory primary and Secondary Schools education in the state.

It was also said the decision was meant to integrate the Almajiri System into the policy and address the lingering problem of street begging.

It would be recalled that the state governor, Abdullahi Ganduje, announced the ban on street begging by children popularly referred to as Almajiris.

COVID-19: Gombe to repatriate 11,700 Almajiri boys to their states of origin