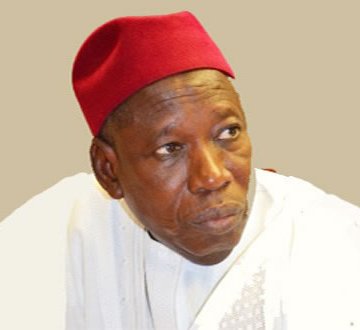 AHEAD of the controversial visit to Kano by Sen. Rabi’u Kwankwaso on Tuesday, the Presidency on Monday summoned Gov. Abdullahi Ganduje and the Senator to avert a breakdown of law and order in Kano State.

The governor, accompanied by two serving senators and two members of the House of Representatives from the state, met with the Chief of Staff to the President, Malam Abba Kyari at the Presidential Villa.

Ganduje, however, declined to speak to State House correspondents after the closed-door meeting.

The News Agency of Nigeria (NAN) reports that Sen. Kwankwaso is also expected to meet with Vice-President Yemi Osinbajo at the presidential villa, today, over the matter.

NAN recalls that Kano State Police Command had advised Kwankwaso against embarking on the visit, due to the tension it had generated which may lead to the breakdown of law and order.

The State Police Commissioner, Rabiu Yusuf, had on Jan. 27, advised Kwankwaso to shelve the visit as security report had indicated that the controversial visit might lead to political unrest.

Yusuf also warned that the law would be allowed to take its full course in the event that the controversial visit resulted in the violent clash in the state.

However, Kwankwaso, who spoke through his spokesperson, Binta Sipikin, vowed to go ahead with the visit in spite of the police advice

She said: “we are coming to visit friends, families and other relatives that for a long time, we have not seen. We have coordinated this visit with seven camera drones and other apparatus that would make it a hitch-free homecoming.’’