Kalu yet to regain freedom, we’re in process of securing his release ―Counsel 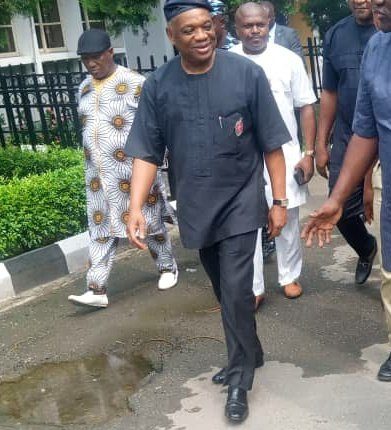 A former Governor of Abia State, Orji Uzor Kalu is yet to be released from the Kuje Correctional Center in Abuja, Tribune Online has learnt.

A source closed to the former governor told our correspondent that Kalu’s lawyers are still pursuing an enrollment order from the Supreme Court, which had, last week nullified the process that led to the conviction and sentencing of the former governor, his company, Slok Nigeria Limited and Ude Jones Udeogu.

The source, who did not want his name mentioned said the former governor was still in the process of regaining his freedom.

According to one of the counsels to Kalu, who also craved anonymity, said their client was yet to be released.

“We are in the process of securing his release. You are aware that the judgment was given last Friday and been weekend, we were unable to get the enrolment order from the Supreme Court that Friday. We are in process of getting the enrolment order from the Supreme Court which will be submitted to the authorities of the Nigerian Correctional Services to secure his release,” he said.

On whether or not Kalu will benefit from the judgment of the apex court when he was not a party in the appeal, the lawyer said Kalu will.

“The Supreme Court voided the process leading to the entire judgment. All parties affected by that judgment are beneficiaries. Certainly, Kalu will benefit from it, he is the first defendant in the case,” he said.

Slok Nigeria Limited and Ude Jones Udeogu had appealed against the jurisdiction of the Federal High Court Lagos, presided over by Justice Mohammed Idris to try them, having been elevated to the Court of Appeal.

The apex court held last Friday that the trial that led to the conviction of the three defendants was fret with irregularities. It then ordered that a fresh trial be conducted.

The 7-man panel of the Supreme Court in a unanimous decision held that the federal high court in Lagos acted without jurisdiction when it convicted Kalu, his firm, Slok Nigeria Limited and former Director of Finance in Abia State, Udeogu.

It held that trial Justice Mohammed Idris was no longer a judge of the federal high court as at the time he sat and delivered the judgement that convicted the defendants for allegedly stealing about N7.1 billion from Abia State treasury.