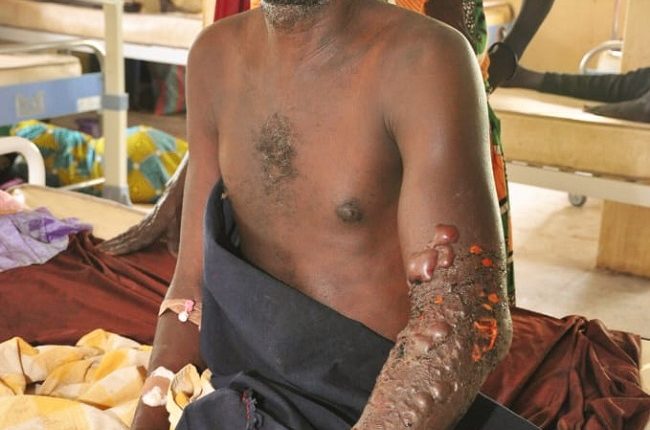 The collaborative effort is to ensure that victims of snakebite in Kaltungo and its environs heave a sigh of relief considering what they are presently going through each time there is a snake bite.

To ensure that the upgrading took effect immediately, an assessment team from the Abuja Head office of the SDGs Led by Idris Bawa has paid a visit to the Hospital in Company of the Director, Hospital Services of the State Ministry of Health, Dr, Emmanuel James Mahdi.

The assessment visitation according to Idris Bawa followed the request by the State Governor, Muhammadu Inuwa Yahaya to the Office of the Special Adviser to the President on Sustainable Development Goals (SDGs) on the need for the upgrade of the hospital.

The development is aimed at reducing the suffering of people of the area occasioned by the devastating impact of snakebites which includes work hours, drain on the economy as well as related health challenges associated with snakebites.

Idris Bawa explained that having assessed the requirements needed for the upgrade of the hospital which includes additional laboratories, staff quarters, wards, solar power, ambulances and critical equipment, work will begin as soon as approval is obtained from the presidency.

Idris Bawa who promised the Mai Kaltungo of the urgency of the project also advised the people to put an eye on the project when it commenced adding that as people, they have a responsibility to protect as well as the quality of public property.

While receiving the delegation in his palace, the Mai Kaltungo, Saleh Mohammed expressed gratitude to Governor Muhammadu Inuwa Yahaya for his tremendous efforts to the development of the Chiefdom.

Saleh Mohammed recalled that barely two months ago, the Governor upgraded and remodelled Kaltungo General Hospital in addition to the reconstruction of Government Science Secondary School, Kaltungo among many other developmental projects.

The  SDGs Team was also at Jauro Tudun Wada Primary School in Gombe metropolis to assess the space with a view to upgrading it to a Mega Primary School.

Speaking to journalists after the inspection visit, the team leader, Architect Bashir Bawa said that some of the School structures will require a total overhaul in addition to the construction of new ones to decongest the overpopulated classes.

He said the upgrade of Kaltungo Snakebite Hospital will certainly bring succour to the people as patients are being brought as far as eight neighbouring States for treatment for Snakebite cases.

Alhaji Bashir Tukur also said that giving the overgrowing population of Tudun Wada Primary School, there is a need for its expansion in terms of structures which necessitated the intervention of the SDGs.

Insecurity: Our leaders need to be responsible ― Pastor Enenche