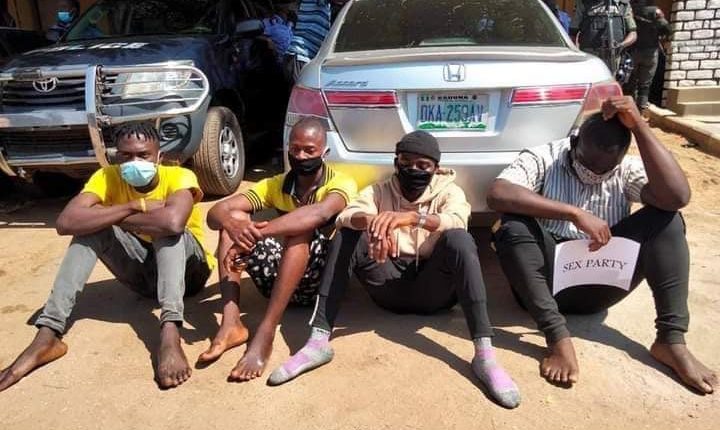 Kaduna State police command has said the owner of the hotel that was to host the Kaduna sex party, three others have been arrested, while the principal organiser of the event is currently at large.

In a press conference in Kaduna to x-ray some of the achievements of the command, the state Police commissioner, Umar Muri said one very devastating and heart touching trend currently bedevilling the state is the unimaginable habit of the youths indulging in activities that are expressly criminalized by the extant laws of the State particularly the Penal Code Law of Kaduna State.

”For instance, on 27th December, 2020 at about 2030hrs, based credible information that some youths, in wanton violation of the existing Covid-19 Regulations prohibiting Assembly or Gathering of individuals for social activities amongst other activities in the State, concluded plans to stage an elaborate party titled ’Kaduna Sex Party’ at Asher Land Joint Hotel, opposite Post Office Junction, S/Tasha, Kaduna.

”On receipt of this information, teams of Operation Yaki and Policemen from S/Tasha Division swung into action and arrested the following suspects: Abraham Albera ‘m’ owner of the Hotel, Umar Rufai ‘m’ of No.27 Calabar Street/Katsina road, Kaduna; and Suleiman Lemona ‘m’ of Ajiya Street, S/Tasha, Kaduna.

”Upon interrogation, the suspects voluntarily confessed to have actively participated in organizing the event.

”Information has it that the principal organizer of the event is at large. All the musical instruments brought for the event were recovered. Suspects are currently under investigation and will be charged to court.

”I must warn our teeming youths in the State of this abysmal, shameful and degrading activity indulged and perpetrated by them for self-satisfaction and aggrandisement.

”They must realised that having a sex party anywhere in the State or even outside the State for whatever reason is condemnable and legally criminalised by virtue of Sections 166, 168, 260 and 368 of the Kaduna State Penal Code Law, 2017 which prescribed punishment for one (1) year imprisonment or Ten thousand (N10,000:00) fine for Public Nuisance, same punishment applies for Obscene or Indecent Acts, Fourteen (14) years Imprisonment and fine of One Hundred Thousand (N100,000:00) Naira for Act of Gross Indecency on a person and two year imprisonment or fine of Fifty Thousand (N50,000:00) or both for the offence of Adultery respectively.

”In view of these offences capable of being committed in a sex party as organised in Sabon Tasha and the punishments mentioned above based on the cited sections of the Penal Code, I expect the youths to wholeheartedly desist from this dirty and criminalised activity called “Sex Party” anywhere in the state, as perpetrators of this act, will certainly be arrested and decisively dealt with according to the law of the state.

”This is more so that our religious injunctions both as Christians and Muslims expressly and unanimously prohibit the above mentioned activities and the perpetrators of this sin are sure to go to hellfire in the life hereafter.

”I also implore our religious leaders from both sides of our religion to take this very serious and caution the youths in this regard.