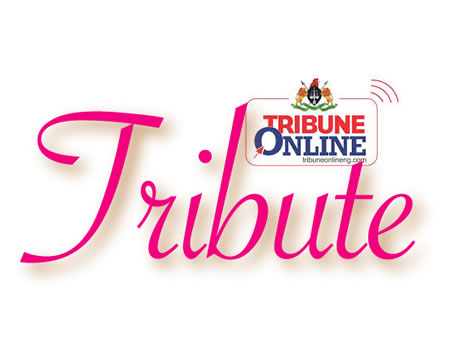 Justice Sunday Akinola Akintan, a retired Justice of the Supreme Court of Nigeria, is a man of great accomplishments in his calling and other areas of life, which have earned him fame and recognition worldwide. However, despite his extensive national and international exposure, he has remained inseparable from his local community of origin, Idanre in Ondo State.

His closeness to the community and passion to impact the people has endured all the way from his humble beginnings to the attainment of the dizzying heights of his professional and public service career. Even in retirement he is not tired of pursuing the purpose of his people. And many have wondered what is it about his community that has made him unable to look away.

The answer to this puzzle is found in his autobiography, launched a few months ago. It gives a deep insight into his uncommon commitment and loyalty to the community. The book was presented at a colorful event graced by eminent jurists, legal luminaries, scholars, distinguished personalities from other walks of life and of course the overwhelming presence of representatives of his community.

Titled “Reminiscences: My Journey Through Life”, the 218-page book is a chronological account of key events in the life of the retired jurist, from his birth in the bucolic surroundings of Oke-Idanre in present-day Ondo State, to his formal education at home and abroad, his first job after secondary school as a trainee draftsman at the Federal Survey Department in 1958, his last day on the bench at the apex court 50 years later; and his other civic engagements in retirement.

Expectedly, the book reveals Justice Akintan’s good upbringing and how a strict adherence to family values, hard work and probity had guided him through his education and his long, unblemished and meritorious public service career, including 30 years on the bench.

But of more interest is his inspirational life story leading to his life-long commitment to his roots and the development of his people through purposeful community leadership.

The narrative in the book reveals not just Justice Akintan’s proud association with his native community and its folks, but also an impulse to confront his people’s challenges and promote their material and spiritual progress from his pedestal.

The book shows how he developed a trait of social responsibility early in his life, especially from the point when as a law student in London, he took upon himself the responsibility of funding the education of a girl whom his mother had adopted. He did this from his meagre earnings from a series of menial jobs that he took up in London to fend for himself as an external student.

Justice Akintan was employed as a pupil state counsel in the Federal Ministry of Justice shortly after he was called to the Nigerian bar upon completing his programme at the Nigerian Law School. He moved across departments in the federal civil service until his appointment in 1978 as a judge.

His appointment as a judge presented an opportunity for him to get close to his community. When he got to know that he was being considered for appointment as a judge, he made it clear that he would prefer the appointment to be to a state high court. His main reason was to avoid transfer throughout the country because he was just starting a family.

But he also knew that a state appointment would take him closer home and enable him to contribute his own quota to the take-off of his new state. Ondo had been created only two years before, after the old Western State was split into three.

His prayers were answered when he and two others – Sydney Afonja and Emmanuel Ogunleye – were appointed by the Federal Military Government of General Olusegun Obasanjo as judges for the Ondo State judiciary.

As a judge, he moved across the judicial divisions of the state – Akure, Owo and Ado-Ekiti, contributing to laying the foundation for the administration of justice in the new state.

His movement to Akure, near his home town, Idanre, allowed him to involve himself more in many activities for the development of the town. He played a leading role in the building of the Idanre General Hospital. At that time, there was no hospital in any part of the town. Even though the military administration of General Robert Adeyinka Adebayo in the old Western State had laid the foundation for a cottage hospital in Idanre, the project had been immediately abandoned. Justice Akintan called a series of meetings with Idanre indigenes to discuss the cause of the inaction on the project and what could be done to redress the situation.

After helping to resolve the issues and organising a fundraiser, the community was able to build a general hospital on the same site that has remained the main public healthcare facility in the area.

Two of the other major community projects which he coordinated were the building of a new Obas’s palace in Odo-Idanre and creating an alternative approach to the popular tourism site in the town, Oke-Idanre. The approach offers tourists another route to the site other than climbing through the steps.

After his appointment as a high court judge, Justice Akintan had also become more involved in the activities of his local branch of the Anglican Church. His involvement in church activities had been limited to attending Sunday services and singing in the choir during his school days. He was instrumental in the creation of the Idanre Archdeaconry and Akure Archdeaconry from the Ondo Diocese. For St Paul Church Odode Idanre he bought a modern pipe Organ for the church worth millions of Naira. Akure Archdeaconry later became a diocese with Justice Akintan serving as its chancellor.

Justice Akintan is a chip off the old block in his passion for the development of his community. His father, Emmanuel Olofingunleka Akintan, long before him had contributed to expanding the economic frontiers of Oke Idanre and transforming the economic fortunes of the then Western Region of Nigeria.

This he had done through the role he played in grafting cocoa to the soil of the area then known as Ondo Province, which is now Ondo and Ekiti states. He had a very large cocoa plantation. Several decades later, cocoa farming continues to provide livelihood for the people of the area and form the bedrock of many family wealth. Idanre remains one of the major cocoa-producing areas of Nigeria.

Pa Emmanuel Akintan was well to do by the standard of his time and he was compassionate with his wealth. According to his son, Justice Akintan, apart from his biological children and farm workers, also had living with him in his Owena house, relatives and their children. In addition, he  had a passion for community service which Justice Akintan apparently inherited and has pursued ever since.

His love for the younger generation and passion to positively impact their lives is legendary. No wonder his young looks belies his age. He has done a lot to raise the profile of many less privileged Idanre youths without publicity. In spite of his advancement in age, moving closer to 80, he is still cerebral and alert. Some of his peers are suffering from dementia. One of the secrets behind his healthy living is his habit of reading and always keeping abreast with national and international news.

Justice Akintan is a man of adventure. He and his beautiful, virtuous wife Eunice Tinuola (who I fondly refer to as Mummy) enjoy traveling abroad thrice a year and they always returned refreshed and energized. They still observed this routine of going abroad for holidays this year in spite of the coronavirus pandemic and they are back bubbling with energy. In retirement Justice Akintan is enjoying the best the world can offer.

He has cause to thank God for keeping him alive. He once had a close shave with death some years back when he was still at the Supreme Court. He had gone to London with his wife on his annual vacation. Hardly had they arrived than he started complaining of excruciating abdominal pains. He was saved by the prompt attention of doctors who upon opening up his bowels discovered be had ruptured intestines and they quickly did the needful. More than a decade after his retirement from public service, Justice Akintan remains an influential community leader and continues to be venerated for his contributions to the development of Idanre, Ondo State and Nigeria.

How I became prominent in Nollywood in just 7 years —Actor, Bolanle Ninalowo