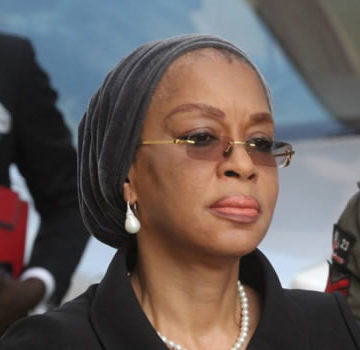 THE Economic and Financial Crimes Commission (EFCC) on Friday played an audio recording between embattled Federal High Court Judge,  Justice Rita Ofili Ajumogobia and an investigator with the commission where the Judge claimed to be on admission in the hospital, which the EFCC said it found out to be a ‘lie’.

In the 59 seconds telephone audio recording, which was played in court,  Ajumogobia could be heard telling the EFCC operative, Abdullahi Lawal that she was on admission at Gold Cross Hospital, Bourdillion Road, Ikoyi, but immediately ended the call when Lawal told her that they discovered that she was not on admission in the hospital.

Excerpts from the telephone conversation:

Lawal: Am I speaking with honourable Justice Ajumogobia?

Lawal: I am calling in respect of your scheduled visit to our office.

Ajumogobia: Yes,  yes.  I am not running away.  I am presently on admission at Gold Cross Hospital and I would ask my doctor when I can be discharged so that I can come to your office.

Lawal: Is it the Gold Cross at Bourdillion Road?

Lawal: We are here and we would like to know which of the wards you are.

Ajumogobia: So you are here?

Apparently, Ajumogobia had ended the call.

Lawal is the 12th prosecution witness in the trial of Ajumogobia and a Senior Advocate of Nigeria,  Godwin Obla who was accused by the EFCC of giving the Judge a bribe of N5 million in order to pervert the cause of justice.

The embattled judge and the SAN were arraigned before Justice Hakeem Oshodi of an Ikeja High Court sitting in Lagos on November 28, 2016, on 30 counts bordering on giving and receiving gratification.

At Friday’s proceedings, Lawal who was led in evidence by EFCC prosecutor,  Rotimi Oyedepo, further told the court that when Ajumogobia was asked to explain a transaction of N8 million which the commission found in her ‘company’s’ account,  Nigel and Colive domiciled in Diamond Bank,  she explained that it proceeded from a land she sold In Abeokuta.

“Upon investigation, we discovered that the said Haruna is a Bureau de Change operator here in Lagos while the said Tola is one of the contractors that helped with the building of her house in Parkview Estate in Ikoyi.

“When both men were questioned they denied buying land from the Judge,  adding that there was no transaction between them,” he said.

The operative further told the court that investigations revealed that one Musa Omale an assistant Comptroller of Customs paid the sum of N12m into Nigel and Colive’s account, which Ajumogobia is the sole signatory.

At this point,  the EFCC prosecutor, Oyedepo asked the court for a short adjournment in order to amend some of the charges against the defendants.

I. E Adedipe,  counsel to Obla SAN,  who is the second defendant, brought an application asking the court to release his client’s international passport in order to enable him to travel to the US.

Adedipe also told the court to allow Obla to be in possession of his passport for four weeks in order to enable him to renew his US visa which is due to expire on the 28th of February.

Justice Oshodi granted the application and adjourned the matter till 23 March for the continuation of trial.