JUST IN: Tension in Iworoko-Ekiti as 15 confirmed killed in trailer accident 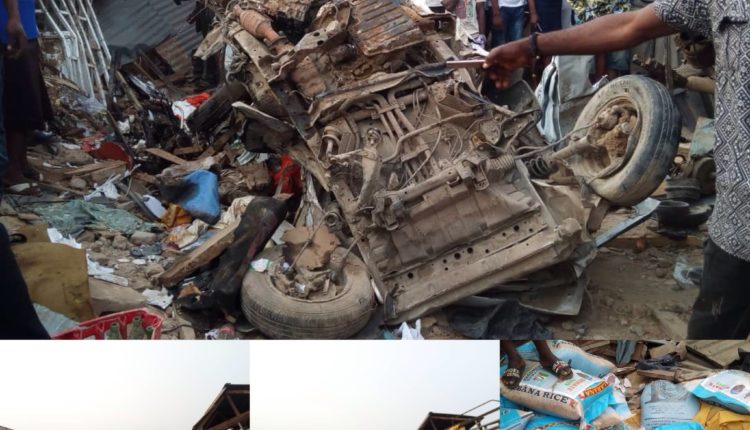 Iworoko-Ekiti community is currently mourning and angry as a trailer conveying branded rice crashed into their market, killing no fewer than 15 people and injuring many others.

The accident, which occurred at about 8:20 pm on Saturday night, involved an unmarked articulated vehicle that was heading towards Ado Ekiti from Ifaki axis of the state.

Witnesses claimed that the articulated vehicle had lost control following a brake failure, with some of the witnesses contending that the driver’s attempt to use the road divider to stop the vehicle was unsuccessful and it crashed into stalls, shops and people.

In the wake of the crack, 15 people laid dead and a commercial mini bus, popularly known among the locals as “Akoto”; a block of stalls in the Iworoko Market; a barber’s shop, a drug store and others were destroyed.

Witnesses said the barber and those who were in his shop to charge their phones; the passengers in the “Akoto”, women selling tomatoes, okro, and sundry foodstuff, including their children were victims.

Among the dead were said to be two students of EKSU; a serving corps member, a pepper/tomatoes trader, whose name was given as Funmilola and her son, identified simply as Olu.

A private mechanic company was said to have brought its heavy duty towing truck to help lift the crashed tractor of the trailer which had trapped the crushed “Akoto” and shops, before some of the victims could be pulled out of the rubble.

By Sunday morning when the Ekiti State Traffic Management Agency (EKSTMA) officials arrived with their towing vehicle, the youth of the community, who had massed around the scene, chased them away for allegedly coming too late and blocked the Ado – Ifaki Road, which is one of the major routes for travellers to Kwara, Kogi and other states.

The community youths, who were becoming irate, also prevented a vehicle believed to be the advance team of the Deputy Governor, but which the mob mistook foe a police vehicle, from settling down at the scene.

Deputy governor of the state, Chief Bisi Egbeyemi, who visited the scene on Sunday morning, commiserated with the traditional ruler of Iworoko, Oba Michael Olufemi Aladejana II and the chiefs, and prayed for the community.

Chief Egbeyemi, assured the Alaworoko that measures would be put in place to prevent a reoccurrence of such incident, saying the state government would reconstruct the market.

Egbeyemi said: “I’ve been there. We are going to look at what we can do to prevent this kind of incident from reoccurring. The market there, we are going to work on it.

“Let me tell the youths that are blocking the road that this will not solve the problem. Those that have lost their lives have gone. No amount of trouble-making will revive them. We don’t want any more casualties in Iworoko.

“The chiefs will take care; they would go to the houses of the bereaved and console them. We will go to the hospital to take see those injured.”

At the hospital, the Ekiti deputy governor charged the doctors at the Accident and Emergency Ward of EKSUTH to take care of the injured victims and also instructed that the dead be enbalmed, promising that the state government would pick the bills.

Revelling in history that entertains, refreshes

JUST IN: Again, trailer crushes woman to death in Ibadan